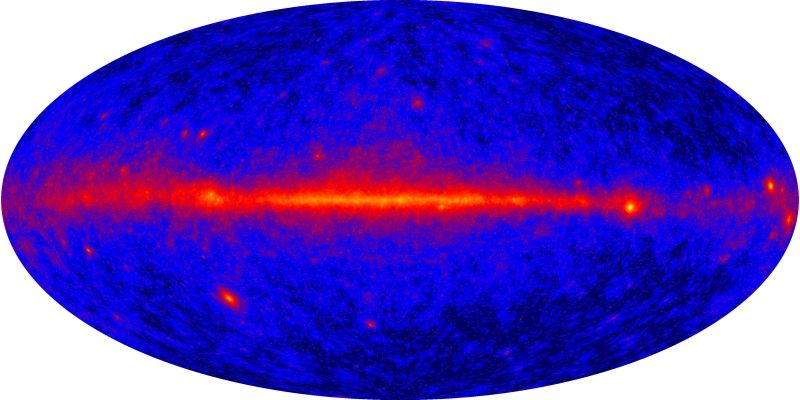 Explanation: Launched on June 11 to explore the universe at extreme energies, the Gamma-ray Large Area Space Telescope has been officially renamed the Fermi Gamma-ray Space Telescope, in honor of Nobel Laureate Enrico Fermi (1901-1954), pioneer in high-energy physics. After testing, Fermi's two instruments, the Gamma-ray Burst Monitor (GBM) and the Large Area Telescope (LAT), are now regularly returning data. Fermi's first map of the gamma-ray sky from the LAT is shown in this false-color image, an all-sky view that looks toward the center of our Milky Way Galaxy with the galactic plane projected across the middle. What shines in the gamma-ray sky? Along the galactic plane, energetic cosmic rays collide with gas and dust to produce the diffuse gamma-ray glow. Strong emission from spinning neutron stars or pulsars, and distant active galaxies known as blazars, can be identified by placing your cursor over the map. A prelude to future discoveries, the remarkable result combines only 4 days of observations, equivalent to a year of observations with the Compton Gamma-ray Observatory mission of the 1990s. In addition to the ability to monitor gamma-ray bursts, the greatly improved sensitivity will allow Fermi to look deeper into the high-energy Universe.