I have only a dim recollection of reading Solaris by Stanislaw Lem decades ago and have never seen the 1972 Russian film, so watched the 2002 film without preconceptions.

Psychologist Chris Kelvin (George Clooney) answers a call for help from an old friend, Gibarian, currently based on a space station studying the planet Solaris. On arrival, Kelvin discovers that Gibarian has committed suicide and two surviving scientists are the only people on board. However, he catches a glimpse of a young boy who appears to be Gibarian's son and then meets a reincarnation of his own wife, Rheya (a compelling performance by Natascha McElhone) who had previously died on Earth. He realises that a powerful intelligence on the planet was examining the thoughts and dreams of the humans and bringing to life that which they most yearned for or felt guilty about. Eventually, he is left with a series of difficult choices.

The film focuses on the relationship between Kelvin and Rheya - or rather the version of Rheya created from his memories - and is a strong on atmosphere and psychology. Those who expect an SF film to be packed with action and special effects will be very disappointed with Solaris. Furthermore, I gather from the Wiki summary that Lem wasn't much impressed with either film (the 2002 version being quite similar in theme to the 1972 one), as his focus was not on the relationships between the couple but rather on the sheer alienness of the intelligence on the planet and the impossibility of achieving any meaningful communication with it. However, I was gripped by the film from start to finish and really enjoyed it. One of the better SF films I've seen.
-------------------------------------
In complete contrast was the first of the current Spiderman series, featuring Tobey Maguire. While this has its darker moments, it lacks the grim, adult feel of the most recent Batman films. However, it makes for painless and undemanding entertainment - if you can swallow the preposterous proposition that someone infected by the bite of a genetically-modified spider can acquire superpowers. The transformation of a weakling nerd student into a powerful hero has huge adolescent wish-fulfilment appeal, while the moral message that "with great power comes great responsibility" is hammered home in word and deed. A worthy effort, with some spectacular swooping flights over the cityscape.
------------------------------------
Evolution is yet another contrast, being a cheerful comedy. It follows the fortunes of a disgraced scientist (played by David Duchovny) who discovers alien life on a meteorite; life which proceeds to evolve at a phenomenal rate, from single-celled to large animals in a matter of weeks. It becomes clear that the future of humanity is at risk, and it is down to the hero and his sidekicks to prevent catastrophe. It rather reminded me of the brilliant Tremors (1990) and, while not quite up to that, is nonetheless a good popcorn movie.
-------------------------------------
The next post on this blog will be in a couple of weeks.

Like you, I found Soderbergh's Solaris to be a wonderful film, probably the best science-fiction movie I have seen for many years. Perhaps because I'm old enough to have personally considered one of its themes, "What would you do for a second chance?", it touched me in a way most films do not. I often listen to its soundtrack, composed by Cliff Martinez, and when I do, my thoughts return to Chris Kelvin, Gibarian, Rehya, and that most mysterious of planets, Solaris. 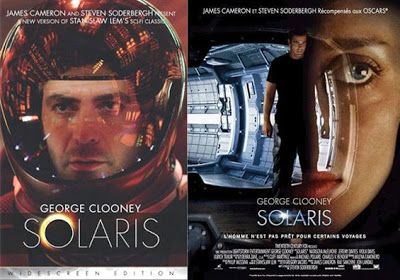 It's no surprise that such a thoughtful, intriguing film would be way over the heads of those who, sadly, think a movie has no value unless it has big explosions in it!

Staff member
Evolution is guilty pleasure movie choice of mine. It is an Ivan Reitman directed film and with David Duchovny, Orlando Jones, and Julianne Moore starring it made for a fun film. Throw in some other recognizable faces like Dan Akroyd & Sarah Silverman with the premise of humanity being saved by shampoo and an instant geek classic is born. 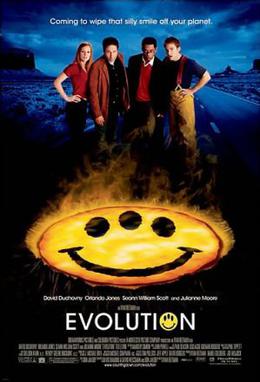