Four men and a lady blast off for the red planet Mars in this lean-budgeted but extremely likable little yarn. Bear in mind that this movie pre-dated all the slick, big-budget films like “When Worlds Collide” and “The Conquest of Space”. The explorers find a thriving civilization of completely humanoid Martians, living in hi-tech underground cities. The leaders of the Martian government act friendly, but they secretly plot to kill the Earthlings and steal the secret of their rocket propulsion system. Scientist Arthur Franz ("Invader from Mars") is the leader of the expedition. Cameron Mitchell is the wisecracking newspaper man, and lovely Virginia Huston is Franz's jilted fiancé. Mitchell falls in love with her, and Franz falls in love with gorgeous Marguerite Chapman, the heroine of the legendary "Spy Smasher” serial, one of the Republic serials on which Lucas and Spielberg patterned "Raiders of the Lost Ark". Director Lesley Selander shot the picture in just 11 days – an admirable accomplishment in view of the results. After all, it was made in 1951 (the same year as "The Thing" and "The Day the Earth Stood Still") in glorious Cinecolor, and the set designs are reminiscent of "This Island Earth".

True fans of 1950s sci-fi will enjoy Morris Ankrum in his second sci-fi role. Mr. Ankrum starred in more sci-fi movies than any other actor – including the prolific John Agar! Ankrum was usually cast as a high-ranking Army officer who commands the brave forces who battle the alien invaders.

However, in “Flight to Mars”, Ankrum is cast as a Martian general who urges his people to invade the Earth! The costumes in “Flight to Mars” are certainly worth commenting on, especially those worn by the attractive female stars – extremely short, "futuristic" dresses. Miss Chapman provides some very appealing eye candy for male viewers. When she walks around in her iridescent minidress and high heeled shoes, she's hot enough to poach eggs! 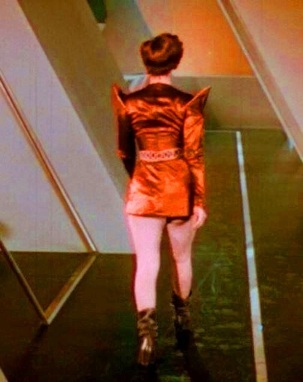 But for some strange reason, Virginia Houston is forced to wear a remarkably unappealing outfit. It’s almost as if the producers wanted to humiliate Miss Houston by making her look ridiculous when compared to the other two ladies. Weird . . . A DVD of “Flight to Mars” is available from the Wade Williams collection, but the print used in the transfer has sections which are in poor condition. Apparently it was the best print Wade could acquire. But even with these flaws, the DVD is well-worth having.

I also have a DVD-R I made from the commercially sold VHS tape, and even though the picture isn't as sharp and colorful, it doesn't have those terrible jumps when pieces of the film are missing. The highly appealing rocket in "Flight to Mars" was originally designed by Chesley Bonestell for "Destination Moon", but the design was rejected because of the wings. The science-minded producers felt that the wings would confuse the audience after the educational Woody Woodpecker cartoon in “Destination Moon”, which carefully explained the lack of air in space. You’ve got to admire the producers for doing this. They were giving the audience credit for being intelligent. Bonestell’s fantastic design for the rocket was later reused in three other movies -- "Queen of Outer Space", "World Without End", and "It! The Terror from Beyond Space". For this reason, the rocket in “Flight to Mars” is the most well-traveled interplanetary vehicle of the 1950s. Sci-fi fans wouldn’t get to see a ship with that much mileage on it again until the Enterprise warped out of orbit in “Star Trek” – fifteen years later!

Brent Gair has created a gorgeous replica of the rocket from Flight to Mars. Amazingly, his model is actually fashioned from wood! The two jpegs below show Brent’s Flight to Mars model while under construction, and then the finished product. 7
I want to make a SCI FI movie, any advice?