NASA Picture Of The Day
Flying Across the Moon 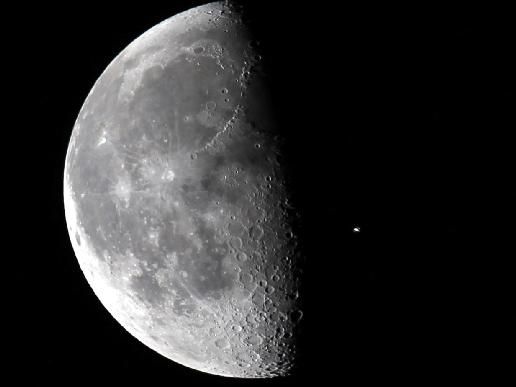 The International Space Station flew across the face of the moon over NASA's Kennedy Space Center in Florida approximately 15 minutes before the launch of space shuttle Discovery on the STS-131 mission. Discovery successfully launched on April 5 and is now docked with the station. STS-131 will deliver the multi-purpose logistics module Leonardo, filled with supplies, a new crew sleeping quarters and science racks that will be transferred to the International Space Station's laboratories. The crew also will switch out a gyroscope on the station’s truss, install a spare ammonia storage tank and retrieve a Japanese experiment from the station’s exterior. Image Credit: Photo courtesy of Fernando Echeverria (More at NASA Picture Of The Day)

Fly to the Moon with Google Earth