When it comes to video games and those big film licences, there is nothing to touch the Star Wars franchise.

George Lucas has already shifted loads of titles from Jedi Arena on the Atari 2600 through to Star Wars Galaxies and spin-offs like Lego Star Wars.

But the latest LucasArts first person shooter, which goes on sale in the UK and Europe on Friday 19 September, is a bit different.

The plot of The Force Unleashed is pretty standard Star Wars stuff.

Set between episodes III and IV, you play Darth's Vader's secret apprentice on a mission to track down the last of the Jedi.

But it's the background technology behind The Force Unleashed that is the most interesting thing about the title.

Created by former biologists at Oxford University, it promises to change the way that games are both made and played in the future.

Animal research
Almost every video and computer ever game released has relied on traditional, cartoon-style animation.

If your game character is shot in the leg, for example, your console will play a canned or pre-programmed routine stored in its memory. 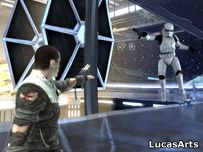 But that kind of animation has its drawbacks, according to Torsten Reil, one of the founders of NaturalMotion, the Oxford-based company behind the new technology used in The Force Unleashed.

"It can never be truly interactive. You can never see something that hasn't been planned by the game designers," he said.

Torsten stumbled on a different method while he was studying in the Zoology department of Oxford University in the late 1990s.

He said: "We were trying to simulate animals and get computer models to walk realistically. We started using artificial evolution and genetic algorithms to get the figures to move.

"It started off as biology research. But then we realised if we could get it to work in real-time on game consoles we would have a completely new way of creating interactive characters."

Procedural animation
So what does NaturalMotion's technology do?

Instead of those pre-drawn animations, it treats the game world as a giant biology and physics experiment.

Complex mathematics are used to simulate the body and muscles of in-game characters.

It means they can react with a degree of intelligence and self-awareness.

If a computer-controlled character is shot in the leg, it might reach out and grab a ledge to try and save itself. Or fall down and grab its leg in pain while drawing its gun to shoot back.

The final action will depend not on a pre-drawn routine built by a designer but on a series of random and environmental factors built into the game itself.

"You can think of each character as a living being," said Torsten Reil. "It has a sense of where it is and what's going on. It has a sense of pain and it might try and protect itself so it doesn't get hurt."

For Star Wars fans (well, XBox 360 and PS3 owners) it means you can use your Jedi force to pick up stormtroopers and fling them across the room.

They struggle realistically and might try to grab on to solid objects, or each other, to save themselves.

Each time the game is played the stormtroopers will react in a different way.

The company is now working on its own American football game, Backbreaker, which uses the technology to bring tackles to life. 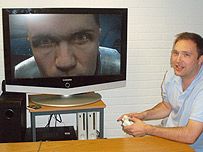 Other games are in the planning stage and are expected to be announced soon.
Thorston Reil told Newsbeat: "Millions of people have what, just a few years ago, would have been called a supercomputer in their front room.

"What we are doing is making use of that power underneath your TV.
"This kind of technology is going to be a major driving force in games and animation.

"Before too long we will have virtual environments that are indistinguishable from the real world and are as surprising.

"It's a scary idea in a way, but it is where we are going in a few year's time.This article is from the BBC News website. © British Broadcasting Corporation

Staff member
That is a pretty cool implementation of the technology; it'll certainly help to give gamers that feeling of being immersed in a game.

I also see the writing on the wall... it is time for me to upgrade my X-Box to a 360 sometime next year.