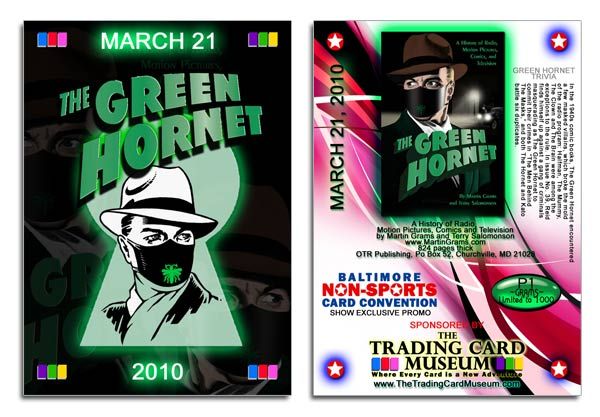 Originally appeared on Scoop Industry News
February 25, 2010​
A limited edition Green Hornet promo card, designed exclusively for the Baltimore Non-Sports Card Convention and offered in conjunction with Martin Grams' and Terry Salomonsons' upcoming Green Hornet book, will be issued with each paid admission to the March 21, 2010 show while supplies last. Only 1,000 cards will be printed.

The convention will feature numerous tables of exhibitors from the non-sports hobby, including artists, authors, manufacturers, publishers, and dealers, according to the show's promoter, USA Theatres.

Newly added guests appearing at the convention include Brian Kong (a full-time sketch card artist, who has created over 10,000 original sketch cards from some of the prolific properties including MLB, X-Men, Star Wars, Indiana Jones, Heroes, NBA, Dexter, Marvel Masterpieces, Iron Man, Lord of the Rings, Spiderman 3, Star Trek, Marilyn Monroe, Wizard of Oz, The Complete Avengers, DC: Legacy, and Frankenstein) and Manny Mederos (cartoonist/illustrator and sketch card artist, whose recent projects include sketch card sets such as Voltron, Defender of the Universe, Zombies vs. Cheerleaders, and the Archie Comics/March of Dimes sketch card series).

Other highlights of the convention will include a unique exhibition by Geppi's Entertainment Museum and trading card manufacturer Rittenhouse Archives.

The convention is set to debut on March 21 from 10 AM to 3 PM at the Towson Place Hotel & Suites (Formerly the Holiday Inn Baltimore-Towson), 1100 Cromwell Bridge Road, Towson, Maryland. Admission into the event is $5 for adults and free for children under 12.

For a complete line-up of guests appearing at the convention, visit their website, www.usatheatres.com/conventions.html