Yup, Free! StarDragon is a free novel now available. I downloaded it but have not read any of it yet. 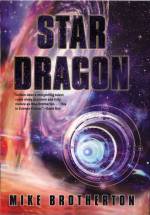 Staff member
Pretty cool. I downloaded the PDF version; it comes in slightly under 3 megs and is 352 pages -- just enough for some weekend reading.

What's really interesting is that the novel was originally released as a hard-back and is being released as a paper-back in early 2005. Yes, folks, that means you can read a current sci-fi novel for free!

Here's the author's entry from his blog about the release: The Official Home Page of Michael Brotherton: Star Dragon for Free