Staff member
Gears of War 5 has been out for some time now so it's not a spoiler talking about it... in Act 4 of the Campaign you must make a decision by Queen Reyna that has unknown ramifications, do you save JD or Del when faced with knowing that the one you don't choose will die! 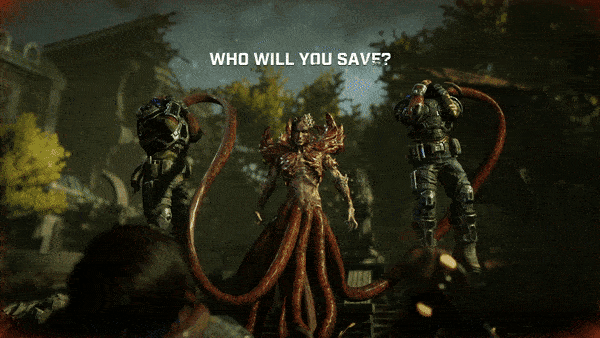 Choosing either character does not change the outcome of playing Gears of War 5 so it's kind of a weird mechanism of the game to be be included.


After making your decision the character you didn't choose ends up with their neck snapped by Reyna. The still alive character is seen holding their best friend before the body is shown falling into the crumbling ruins of the city.​
​
Kait and the survivor are trapped in a collapsed house and must find their way out. Fortunately for them a certain Cole Train is ready to help out but not before Kait and the survivor have a tear filled conversation over the loss of their friend.​
​
After being freed from the house Kait and the survivor come across Marcus fighting a Snatcher. Marcus thanks them for their assistance and then notices that somebody is missing.​
​
After Marcus asks where the missing person is the survivor is too emotional and turns their back to walk away as Kait shows Marcus the dog tags of the missing character.​
​
... and here is where things get slightly different*.​
​
If Del is the survivor Marcus starts repeating "No" over & over in grief while cursing out JD in anger.​
​
If JD is the survivor Marcus tries to comfort JD with a father/son embrace. Kait apologies to Marcus.​
​
Fahz shows up with a transport truck and soon they all have a wild drive with Fahz & Marcus in the truck cab and Kait & the survivor in the back fending off a gauntlet that the truck must pass thru.​
​
In the final scene if Del survived Marcus is shown hold JD's tags but if JD is the survivor then he is shown standing out into the recent battlefield contemplating his lost friend.​
​
In both scenarios Marcus is not told about the choice Kait had to make.​
​
No details of Gears of War 6 have been revealed yet so it's totally unknown how this decision will affect Gears 6. Will the story be rectconned so that both characters are still alive? Will your saved game data from Gear 5 be used to dynamically change the story in Gears 6? Will they pull a 'Dallas' and it was all just a dream?


* = The sequence details may be slightly different on PC versus Xbox.

Staff member
Maybe I should have included a "Both" option?

Originally I chose Del and completed the Campaign but went back and redid Act 4 choosing JD to see if there really was any difference in game play.

I was thinking that perhaps the different characters would trigger a different story branch and was kind of surprised it didn't.

And the answer was nope, slight differences in the cut scenes involving Marcus but everything else was the same.