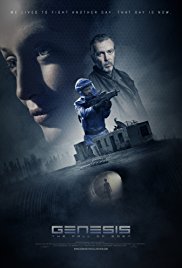 'Genesis' is the third feature from British writing and directing duo Bart Ruspoli & Freddie Hutton-Mills. The first in a sci-fi trilogy, 'Genesis' explores the nature of free will and what it means to be human, against a post apocalyptic backdrop where the remnants of mankind attempt to create A.I. to save them from extinction. The film stars John Hannah (The Mummy trilogy, Marvel's Agents of S.H.I.E.L.D), Olivia Grant (Stardust, Indian Summers), Warren Brown (Strike Back, Luther) and Chike Okonkwo (The Birth of a Nation, Being Mary Jane).

A new scifi trilogy eh?
Is this a new type of superhero film based on AI?
The trailer looks interesting enough.
I'll be watching for this one to hit.

Anyone have more information on this?

First, I must say the production values are top notch.
It is, however, VERY British.
It progresses much like any British miniseries. Lots of constant drama building with intermittent anti-climatic action sequences.
That being said, it is very watchable. Even tho anyone familiar with British scifi will easily recognize the patterns.
There is some decent science fiction but the portrayal of the interactions of the characters is British, very British.
This is a preliminary assessment, Its playing as I type this.
The reason I am typing this while it is playing is because it is not a mesmerizing engagement. Most of the film feels like filler material.
The pretense is okay, The story is okay, the pace is okay but it feels like watching all the other British Science fiction films and mini-series. Nothing that really stands out and causes a "what if" feel.
Frankly, the British anti-climatic drama is getting tiresome for me.
If you liked Day of the Triffids you will like this. If you need something more, not going to happen.
I'm halfway into the film and I expect nothing of any significance in the 2nd half. I may be wrong but chances are, I'm not. If this is a trilogy, as stated, I suspect nothing significant to happen till the final quarter of the final film.

Yup, finished watching it, more of the same with an anticimatic ending.
Can't really see two more films happening, so they probably will.

Special note on the Very British music,
It got irritating.
Typical of British mini-series soundtracks.

If you watch this and like it, I'd appreciate reading why you liked it and how it made you feel.
Over-all I give this a 4 out of 10.

Netflix US has this on DVD, no streaming yet. Just added it to my queue.

Tom said:
It is, however, VERY British.
Click to expand...

Reality Post-Apocalyptic THE COLONY from Discovery