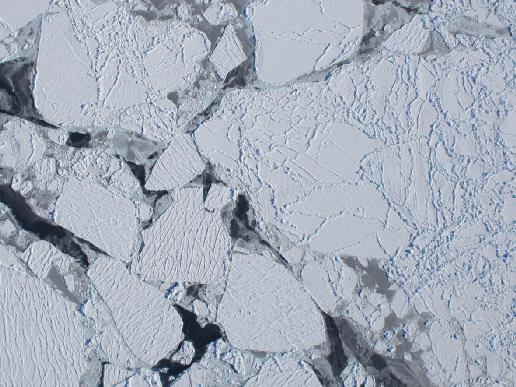 On Oct. 16, Operation Ice Bridge researchers and crew completed the first flight of the Antarctic campaign. The flight was made from the southern tip of South America and its primary target was the Getz Ice Shelf along Antarctica's Amundsen Coast. During the flight along Amundsen Coast, the aircraft's downward-looking Digital Mapping System camera captured this image of sea ice from an altitude of at least 20,000 feet. The DC-8 aircraft flew two parallel tracks along the coast, one just offshore over the floating ice shelf, and one just inland. By measuring on either side of the "grounding line" between the floating ice and the ice on land, scientists can determine the rate at which this near-shore part of the ice shelf is melting. Image Credit: NASA (More at NASA Picture Of The Day)