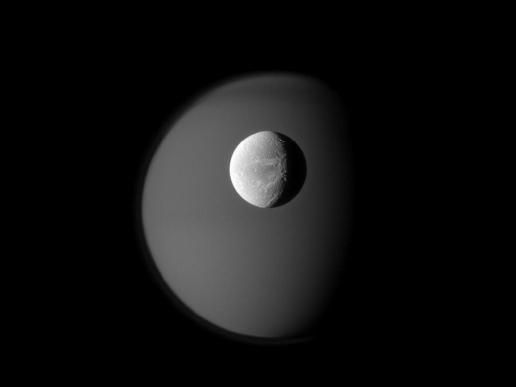 The surface of Saturn's moon Dione is rendered in crisp detail against a hazy, ghostly Titan. Visible in this image are hints of atmospheric banding around Titan's north pole. The image was taken in visible blue light with the Cassini spacecraft narrow-angle camera on April 10, 2010. The view was acquired at a distance of approximately 1.8 million kilometers (1.1 million miles) from Dione and 2.7 million kilometers (1.7 million miles) from Titan. Scale in the original image was 11 kilometers (7 miles) per pixel on Dione and 16 kilometers (10 miles) on Titan. The image has been magnified by a factor of 1.5 and contrast-enhanced to aid visibility. Image Credit: NASA/JPL/Space Science Institute (More at NASA Picture Of The Day)