Tagline: You can't hide from yourself.

Plot: A group of World War II American soldiers encounter a supernatural enemy as they occupy a French castle previously under Nazi control. 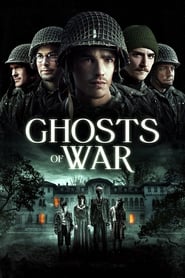 Staff member
Caught Ghosts of War tonight on Netflix. All in all, not bad as it's one of those movies that includes a little twist at the end that is seeable from clues tossed about in the dialog but still not obvious that it was coming. In this it starts off as a horror movie, switches to sci-fi a bit, and then right back to horror again.

Five soldiers are traversing the fields of WWII France on an assignment to find an abandoned chateau, relieve the current crew staying there, and then stay there until they themselves are relieved. Once there they find out why the current crew was so eager to leave as soon they all experience the supernatural. They must then accept what is happening and work towards getting out alive.


Theo Rossi and Billy Zane are the recognizable actors in this one. Even with the horror elements being mostly cliched scenes the slower pace of the action helps to give it more of a drama feel then the usual 'run-around-and-get-killed' movies.

Personally, I enjoyed this movie more because of the twist at the end.
One of the better movies I've watched recently. Plus, I've liked Billy Zane since I saw him in Tales From The Crypt: Demon Knight.

Tom said:
Personally, I enjoyed this movie more because of the twist at the end.
One of the better movies I've watched recently. Plus, I've liked Billy Zane since I saw him in Tales From The Crypt: Demon Knight.
Click to expand...

Yeah, with so many movies playing in the background as I work from home this is one of the few that caught my attention.

Between this and Overlord I've come to realize that "war horror" movies could be their own sub genre.

Kevin said:
"war horror" movies could be their own sub genre
Click to expand...

I've always thought of WAR as horror so any movie about war would be 'war horror' to me.
Horror to me is anything I find morally offensive. So basically any film which has killing, rape, abduction, slavery or mental/physical abuse is horror to me.

Kevin said:
movies playing in the background as I work from home
Click to expand...

I do that too. Most of the time the music soundtrack sucks me in.
Boss Level did that. Lots of old Boston songs made it nearly impossible to concentrate on the task I was doing. Then the Groundhog Day action kept me distracted. LOL

I'm playing a movie right now in a small view player set to 'keep on top' right now.
I do that a lot when I get new movies because most new movies are garbage.
It also helps me sort which movies I want to see in earnest and which I want to actually spend my money on. Most movies are not only not worth buying, they're not worth renting either.