NASA Picture Of The Day
Global Map of Mercury 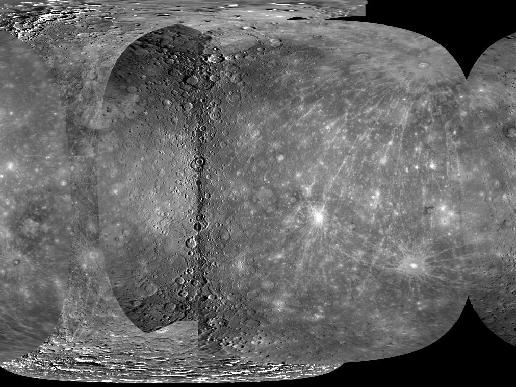 In December 2009, the first high-resolution global map of Mercury was made publicly available. These images are from MESSENGER, a NASA Discovery mission to conduct the first orbital study of the innermost planet, Mercury. Members of the MESSENGER team and experts from the U. S. Geological Survey (USGS) used images from MESSENGER's three Mercury flybys and from the Mariner 10 mission in 1974-75 to create a global mosaic that covers 97.7% of Mercury's surface at a resolution of 500 meters/pixel (0.31 miles/pixel). Image Credit: NASA/Johns Hopkins University Applied Physics Laboratory/Carnegie Institution of Washington/U. S. Geological Survey/Arizona State University (More at NASA Picture Of The Day)