Overview: Everyone knows the name Commissioner Gordon. He is one of the crime world's greatest foes, a man whose reputation is synonymous with law and order. But what is known of Gordon's story and his rise from rookie detective to Police Commissioner? What did it take to navigate the multiple layers of corruption that secretly ruled Gotham City, the spawning ground of the world's most iconic villains? And what circumstances created them – the larger-than-life personas who would become Catwoman, The Penguin, The Riddler, Two-Face and The Joker? 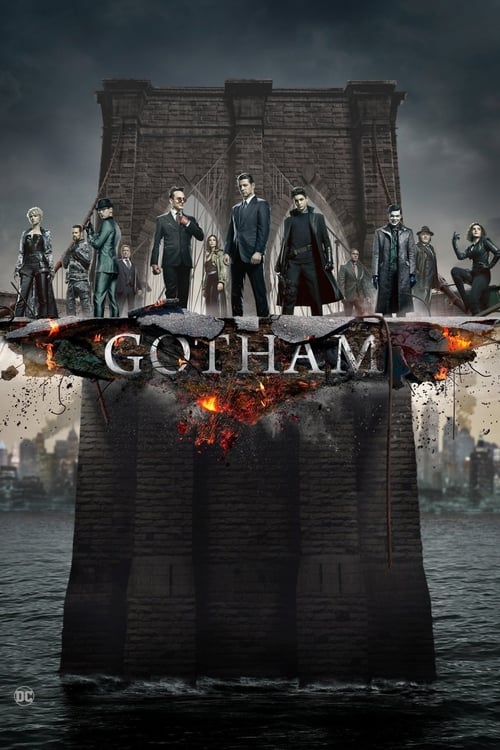 Staff member
I had a chance to watch the first three episodes of Gotham, the Batman universe origins TV series, and I must say it is better than I was anticipating it to be.

Visually it is a nice mix of all of the modern Batman movies with styling cues mostly from the Christian Bale era with a few nods towards the Keaton/Kilmer/Clooney movies. There is nothing over-the-top silly like the styling of Batman & Robin (anybody else remember the dayglo paint in the gang den?

) but a few glimpses, for lack of a better way of putting it, make you think of those earlier movies. For example, the Penquin is far from the character Danny Devito played but there is a scene where Gotham's Penquin shoves food in his mouth from being so hungry after a near death experience which is reminiscent of a scene with Devito's Penquin. Another glimpse from those earlier movies is the girl who play a young Selena "Cat Woman" Kyle looks like a cross between a young Michelle Pfeiffer from Batman Returns and Cat Woman portrayed the last few years in the various animated series and comics. Along with a good amount of neon signs the special effects team is doing a great job of presenting a "Gotham City" that looks realistic while at the same time making you think of the world of Batman.

One of the few problems I would have to point out is that Gotham, like the rest of the DC movies & TV series, is being treated as a stand-alone work with characters & timelines that simply don't align with the much bigger DC Universe as a whole. Continuity is something Marvel has been doing an incredible job of maintaining with their recent movies and is what is helping to make them so successful. DC by contrast seems to dive head first into projects with wanton abandon with no regards to other DC related projects or past history.

Gotham takes place immediately in the days after the murder of Bruce Wayne's parents, an event which is covered in the first episode, so don't expect to "Batman" any time soon. Watch it instead for what is shaping up to be a pretty decent drama series that takes place in one of the many DC alternate worlds.

I'm really enjoying this so far, the only thing that maybe let it down a little was some of the dialogue in the pilot episode. I like the way they have given little cameos to some of the characters that will eventually grow into the baddies from the Batman universe. The only one I don't think we've had a glimpse of yet is the Joker although there have been a few red herrings floating about.

The guy that plays the Penguin has been the standout for me so far.


It will be interesting to see if the Dollmaker returns in a later storyline
I was expecting this to be good and I've not been disappointed.

Staff member
Gotham has been renewed for a second season. DVR watching is playing a role in the ratings for the show so the thing to remember is if you like a show and have it recorded on your DVR, be sure to watch it within a couple of days to help the ratings.

liking it so far. plot-of-the-week combined wi overarching gang story.
(spoilers) it's been fun watching Kapelpot rise from flunky to snitch to player. "Hello Fish!"
I like catgirl's goggles, very steampunk.
I'm curious about Nygma. Will he become criminal-riddler or stay working for The Man? cool this week when he offerred the rubber galoshes and they end up saving Gordon.
I've noticed, Gordon has treated Kapelpot and Nygma with a respect and politeness that they apparently don't see much, so they both view him with favor.
Bullock is great as the wry contrarian. I hope he doesn't end up as mere 'told you so' in Gordon's wake. interesting how, early on, Bullock was the alpha and Gordon followed, and how they're switching roles. I'd like to see more of Bullock's inside info.

... she has confirmed that she won't be back for a second season. Her contract was only for a year and it has not been renewed. No word on if the renewal choice was hers or the show's producers.

Good! I'm not a fan of the character or Jada Pinkett Smith's over-the-top acting - when the show and characters were announced I immediately made a connection (like almost everyone else did) that "fish would get eaten by the penguin" - it remains to be seen whether or not that is the case in the remainder of the season.

Are you watching Gotham @Kevin? Do you think they are doing a good job? I've never read any Batman comics or watched the TV series with Adam West etc - my only knowledge of the characters is from Nolan's Batman trilogy and playing the Arkham games series on the Xbox 360.

I hate the fish character. Brutal and humorless. I see season one ending with Gordon shooting her to save Kabelpot.
Gemma, I'd recommend 'Batman: Dark Knight Returns' and 'Batman: Year One', graphic novels. Also 'The Killing Joke', a Joker origin story. If you're on the budget like me you might find them at a local library.

In one of the first clips from the new season we see new villains The Galvan and his sister Tigress.

Staff member
So what's your guess on what Bruce's father's secret room will lead to? League of Assassins?

Kevin said:
So what's your guess on what Bruce's father's secret room will lead to? League of Assassins?
Click to expand...

all the secrets of Gotham, specifically the financial / criminal activities of major leaders. also maybe secret blueprints/schematics of streets, alleys, etc.
I sure hope S2 will be a little lighter than S1.

screenersam said:
I sure hope S2 will be a little lighter than S1.
Click to expand...

With the "Maniax" crew, it might be just the opposite.

The actor playing Jerome though is sure doing a great job with the birth of The Joker; if nothing else, he seems to be having fun with the role.

Kevin said:
The actor playing Jerome though is sure doing a great job with the birth of The Joker; if nothing else, he seems to be having fun with the role.
Click to expand...

That had better be a bit of a twist plot line that'll turn out not to be what it looked like.

I'm thinking of starting to watch this show now. I really didn't like the two other superhero shows I tried, "Arrow" and "Agents of S.H.I.E.L.D." but everyone seems to tell me to watch "Gotham" and the new "Daredevil" show.

Boreas said:
everyone seems to tell me to watch "Gotham" and the new "Daredevil" show
Click to expand...

Both Gotham and Daredevil are much, much darker in the tone versus Arrow and AoS. If you have Netflix, try Daredevil first.

Kevin said:
Both Gotham and Daredevil are much, much darker in the tone versus Arrow and AoS. If you have Netflix, try Daredevil first.
Click to expand...

Yeah, I heard they went pretty dark. Probably filching from the Frank Miller run. I've always wanted to see a live-action adaptation of the Born Again arc, which was the best Daredevil story until Brian Michael Bendis did his stint on the title with Alex Maleev. Born Again was very mature for Marvel at the time, when DC was consistently starting to deal with more adult themes and Marvel was still catering to kid-friendly audiences.

I don't have Netflix, but I can probably stream it from some site.

Staff member
Hhhmm.... I'm a little disappointed with the main villain of S2.

S2 of Gotham will be dealing Galavan's plan to rebuild Gotham by first first destroying it to get rid of the poor sections of the city.

Staff member
OK, just watched the S2 mid-season ender and.... whoa, this Jim Gordon is not exactly the ultimate law keeper as depicted in previous works.

With Bruce Wayne being so young and the classic villains, by comparison, being mostly guys in the 30's & older, by the time Bruce puts on the Bat suit his foes will be closer to retirement age than prime fighting condition. I can't help but wonder if Gotham will end up taking a huge leap across the Batman comic verse by starting with Gordon as the guy in the suit.

(spoilers) I liked the resolution to the Galavan arc. 'You lost, brother!'
looks like Mr. Freeze is coming.
how bout that penguin, he's the survivor (and winner)
interesting watching Penguin and Nygma working together. I wonder if the character will develop with an uncontrollable habit of answering questions with riddles instead of lying ('Is Gordon at your home?').

screenersam said:
(spoilers) I liked the resolution to the Galavan arc. 'You lost, brother!'
Click to expand...

I think Penguin was robbed of his vengeance though. Now it is just one more Penguin-related incident on Gordon's conscience.

That one kind of came out of nowhere! I was expecting a bit of a build-up teaser to it, maybe a scene of a lab or weapon testing first, not straight-up Freeze in an alley.

screenersam said:
how bout that penguin, he's the survivor (and winner)
interesting watching Penguin and Nygma working together. I wonder if the character will develop with an uncontrollable habit of answering questions with riddles instead of lying ('Is Gordon at your home?').
Click to expand...

Penguin is climbing rapidly in taking over Gotham's underworld. I just can't help but wonder about the on-going relationship between him & Gordon and now they are bonded even deeper in each other's trust.

I like the slow build-up of Nygma as it shows how a sane man can go deeper & deeper into darkness to the point where he turns himself over to madness. I'm curious just how much longer he can get away with remaining working at Gotham PD.
TV show information provided by The Movie Database