NASA Picture Of The Day
Great Ball of Fire 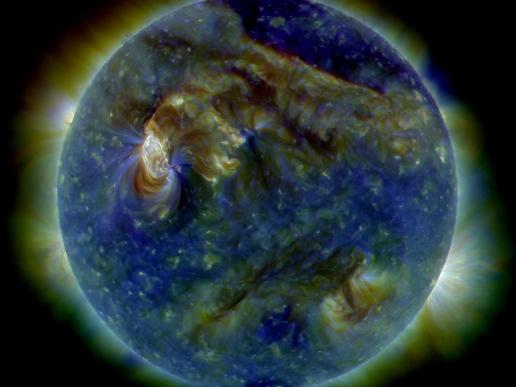 On August 1, 2010, almost the entire Earth-facing side of the sun erupted in a tumult of activity. This image from the Solar Dynamics Observatory of the news-making solar event on August 1 shows the C3-class solar flare (white area on upper left), a solar tsunami (wave-like structure, upper right), multiple filaments of magnetism lifting off the stellar surface, large-scale shaking of the solar corona, radio bursts, a coronal mass ejection and more. This multi-wavelength extreme ultraviolet snapshot from the Solar Dynamics Observatory shows the sun's northern hemisphere in mid-eruption. Different colors in the image represent different gas temperatures. Earth's magnetic field is still reverberating from the solar flare impact on August 3, 2010, which sparked aurorae as far south as Wisconsin and Iowa in the United States. Analysts believe a second solar flare is following behind the first flare and could re-energize the fading geomagnetic storm and spark a new round of Northern Lights. Credit: NASA/SDO/AIA (More at NASA Picture Of The Day)