http://murraystudios.com/GreenLantern.jpg
if this link doesnt work - i just didnt for me- just google image for it.

Thanks for the heads up! It looks like the link no longer works but, like you said, a quick Google search took care of it.

For those looking for them, try here.

The art was done by Brian Murray of Murray Studios.

Last month, we posted some fanboy-friendly information about the script for the “Green Lantern” film, written by Marc Guggenheim, Michael Green and Greg Berlanti, who is also directing the film. COMICON recently spoke with Guggenheim about how the film is progressing, and received an update of sorts on the ring-bearing hero’s big-screen debut.

“I will tell you it features Hal Jordan and is an incredibly faithful rendition of the character,” said Guggenheim, who played it very, very safe with his status report, remarking that he had “sworn a blood oath of secrecy” regarding the film.

As for the timeline on the script, Guggenheim told COMICON that the trio charged with bringing Hal Jordan and his willpower-fueled ring to theaters is currently “doing a rewrite for the studio with Greg [Berlanti] and Michael [Green].”

“We’ll turn that in next week,” said Guggenheim. “We just keep moving forward.”

In related “Green Lantern” news, illustrator Brian Murray posted some of the concept art last week that he created for the film (and that subsequently earned it the the go-ahead for production), but it looks like the art was pulled from the ‘Net. Fortunately, Cinematical has a gallery of the the emerald-hued designs still available.

What are your thoughts on the “Green Lantern” film, Splash Page readers? Do you think it’s possible to pull it off? And if so, who would you cast?
Click to expand... 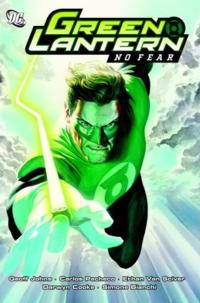 [/FONT] With the huge box-office success of even lesser-known comics characters such as Iron Man it is a bit surprising that Warners took this long to, er, greenlit Green Lantern for a live action movie adaptation. After all, the DC Comics character has been created as far back as 1940!
In his most popular incarnation Green Lantern

was Hal Jordan, a test pilot who was given a power ring by a dying alien, Abin Sur. Jordan thus became a member of the Green Lantern Corps, an interstellar organization of police overseen by the Guardians of the Universe. The Corps' rings were powerless against anything colored yellow, due to a necessary impurity in the ring.
To be honest we only really liked Green Lantern when he was teamed up with the wise-cracking Green Arrow and Black Canary (in those stockings and blonde wig!) was along for the ride. Hal Jordan has always been a rather one-dimensional good guy which explained why the writers at one point turned him into a megalomaniacal villain intent on galactic destruction before killing him off.
Anyway, we have only two words for Hollywood: Geoff Johns and Will Smith. Okay, so that’s more than two words. But the point is: get Geoff Johns to work on the screenplay! Geoff Johns is the Young Turk comics writer who successfully brought back Silver Age sensibilities to both DC’s Green Lantern and Superman titles, giving both a much-needed jolt in the arm. Read here why we also think he should write any future Superman movie version.
And Will Smith? We think Will Smith will make an excellent Green Lantern. No seriously, think about it . . .
UPDATE (11 July 2009): According to the Hollywood Reporter it's official: Ryan Reynolds has been cast as Green Lantern! Reynolds has most recently been seen as Deadpool

in Wolverine. His other movies include The Proposal with Sandra Bullock, The Nines, Smokin' Aces and Waiting.)[FONT=Verdana,Times New Roman]