Space Gullies at the Edge of Hale Crater, Mars

NASA Picture Of The Day
Gullies at the Edge of Hale Crater, Mars 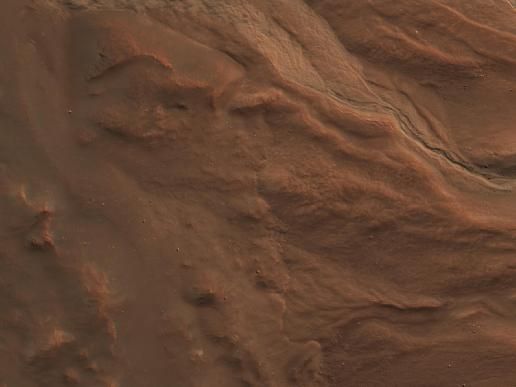 This image from NASA's Mars Reconnaissance Orbiter shows gullies near the edge of Hale crater on southern Mars. Martian gullies carved into hill slopes and the walls of impact craters were discovered several years ago. On Earth, gullies usually form through the action of liquid water -- long thought to be absent on the Martian surface. Whether liquid water carves gullies under today's cold and dry conditions on Mars is a major question that planetary scientists are trying to answer. Gullies at this site are especially interesting because scientists recently discovered actively changing examples at similar locations. Images separated by several years showed changes in the appearance of some of these gullies. Today, planetary scientists are using the HiRISE camera on MRO to examine gullies such as the one in this image for change that might provide a clue about whether liquid water occurs on the surface of Mars. The view covers an area about 1 kilometer, or 0.6 mile, across and was taken on Aug. 3, 2009. Image Credit: NASA/JPL-Caltech/University of Arizona (More at NASA Picture Of The Day)