Staff member
Anybody else watching the Hatfields & McCoys on The History Channel?

For those not familiar with the source material, the Hatfields & McCoys were two families in the Appalachian region of the US that had a decades long feud that started around the time of the US Civil War. Even if you're not interested in US history based dramas it is still a pretty good series with Kevin Costner & Bill Paxton starring. 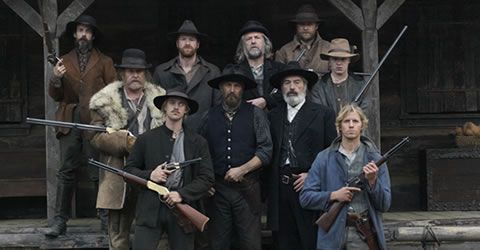 I am watching it Kevin! Very interesting indeed! I didn't realize how much of a bloody feud it was. Just a background to those that haven't watched it, (I realize Kevin posted a link but sometimes you just want to see someone's view with cute little comments, hee, hee) from what I understand the two heads of the families Anderson Hatfield and Randall McCoy were in the Civil War together. Randall McCoy is also a very religious man. This will be a great factor throughout the feud.

Anyway, according to the story from what I saw, Anderson Hatfield deserted the Confederate Army and Randall McCoy was supposed to shoot him for desertion, but stayed his hand. He didn't shoot him and this probably was not a good decision because it could have saved a lot of bloodshed later.

Back in the south, Hatfield's brother Jim Vance, a sick and sadistic S.O.B. shot Harmon McCoy, Randall's brother because he told him he has sex with his dog. They were all drunk and talking trash and Harmon was wearing a Union Blue jacket and Jim Vance didn't like it. Men. Drunk. Stupid. The usual. Am I right ladies? LOL.

So Randall McCoy gets a letter from his wife that his brother is dead and the Hatfields did it. Feud is starting! Soon McCoy returns home to his wife when the war is over. Anderson Hatfield and Randall McCoy then exchanges words in church and later Randall McCoy sees his pig in the hands of a Hatfield. He raised the big for the winter and he marked its ear. They went to court over the pig, and the judge rules in favor of Hatfield. (Apparently, the evidence was eaten, poor piggy!)

Later on there was a festival and Jonse Hatfield gets Rosanna McCoy pregnant. The McCoy sons kidnap Jonse Hatfield and threaten to kill him because he deflowered their sister. But he loves her and wants to marry her. Awwww Anderson Hatfield comes and rescues his son and takes the McCoy boys hostage and dish out some vigilante justice. They shot the three sons of Randall McCoy dead. More bloodshed! They did it illegally because they claimed they were on West Virginia soil and they had the right, but the McCoy boys were in Kentucky. (I don't know if I got that part right) There is a lot of dispute in whose jurisdiction is where.

More people get shot with bounties being placed and a crazy bounty hunter who skins someone's scalp for his bounty (the name escapes me I am doing this all by memory so forgive me). Also, in the meantime, Jonse Hatfield that got Rosanna McCoy pregnant finds out that Rosanna had the baby and it is sickly. He goes to her and her aunt Betty turns him away. This drives him in the arms of Nancy McCoy. So he marries this McCoy! Damn he loves those McCoy girls! Anyway, she demands he hide out his brother Jefferson with them and ruins his honeymoon with her. Upset over this and stupid that he is, he goes and tells his family. Sicko Jim Vance and his one-eyed brother Clay (his eye got stabbed by a splinter of a tree earlier) goes and hunts down Jefferson and kills him. Clay is a dam good shot for having one eye. Ironic. So now we are left off with Anderson Hatfield fleeing in the hills of West Virginia hiding from the bounties and now deputies (most of the bounty hunters were deputised by Kentucky) that McCoy placed on their head for killing his boys. Hatfield wants West Virginia politicians to send Troops to protect them, but they don't want to get riled up in another Civil War. Bloody Feud!

Part 3 is tonight! Watch it people! It's worth it!

Sidenote: What's amazing is the families of Hatfields and McCoys are great friends now, and do reenactments together at get togethers all the time. They even fish and spent time together now.

We've got it set up on are DVR, but haven't had the chance to watch a single episode yet. Once I've had a chance to view it, my next mission will be to come back here to comment. It's always fun to comment and read other takes regarding historical dramas from other people.

Watched the entire Hatfields & McCoys mini-series this weekend. Not back to back, of course, as I needed to come up for air once in a while! Anyway, it was spectacular. In my mind, probably the best mini-series since Lonesome Dove. Liked the gritty realism in which this subject matter was dealt with by the actors and director. This was kind of a lesson in how fueds between neighbors and friends can quickly get out of hand, with family pride being extremely high on both sides and hardly a chance for cooler heads to prevail in such cases. I think that with the possible exception of Clint Eastwood, Costner must have starred in more western genre movies than any other actor who is still alive.
Share:
Facebook Twitter Reddit Pinterest Tumblr WhatsApp Email Share Link
Top