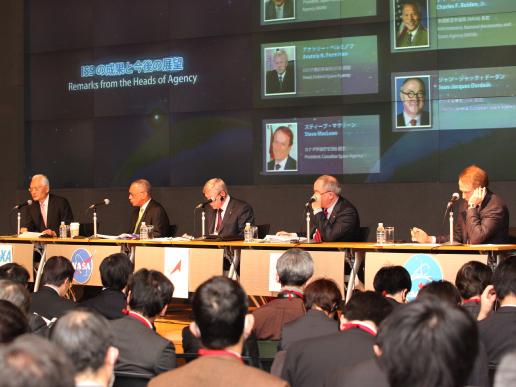 The heads of the International Space Station (ISS) agencies from Canada, Europe, Japan, Russia and the United States met in Tokyo, Japan, on March 11, 2010, to review ISS cooperation. From the left are Dr. Keiji Tachikawa, President of the Japanese Aerospace Exploration Agency, Charles Bolden, NASA Administrator; Jean-Jacques Dordain, Director General of the European Space Agency; Anatoly N. Permirov, Head of the Russian Space Agency; and, Dr. Steve MacLean, President of the Canadian Space Agency. With the assembly of the ISS nearing completion and the capability to support a full-time crew of six established, they noted the outstanding opportunities now offered by the ISS for on-orbit research and for discovery including the operation and management of the world's largest international space complex. The heads of agency reaffirmed the importance of full exploitation of the station's scientific, engineering, utilization, and education potential. They noted that there are no identified technical constraints to continuing ISS operations beyond the current planning horizon, and that the partnership is currently working to certify on-orbit elements through 2028. They emphasized their common intent to undertake the necessary procedures within their respective governments to reach consensus later this year on the continuation of the ISS to the next decade. Image Credit: JAXA (More at NASA Picture Of The Day)