Writer
I haven't been around much lately...trying to get work done on some more stories and novels...but I just got done with the Champagne Books annual awards ceremonies, and came out with my own special award. Heroes Die Young picked up Best-Selling Novel of 2008!

Thanks to everyone who made this award possible!

And for those who haven't yet picked up a copy, the Champagne Bookstore currently has copies on sale (for a discounted price)!

Writer
And the hits keep coming!

Just found out today that I had a glowing review for Heroes Die Young.

I couldn’t put it down - and I was drawn in from the first page on.
Click to expand...

Writer
And just a note for those who own one, Heroes Die Young now has a Kindle edition available...

Congratulations! Awesome news on all accounts.

Writer
Looking for any and all feedback on this, my first attempt at a book trailer...
Any comments or suggestions are welcome.

Writer
If you have been debating whether to pick up a copy or not, today's your lucky day! Champagne Books (and its new sci-fi imprint, Burst Books) are offering Heroes Die Young for the discounted price of 99 cents, but that's for TODAY ONLY, so make sure to hurry.

Staff member
@astonwest is Champagne Books still around? I'm going back through the posts to pick up some new reading material for the collection and the Champagne Books link returns a 404 error message.

For anybody looking to pick up a copy in the US, all of the "Aston West" works are available on Amazon.

Kevin said:
@astonwest is Champagne Books still around? I'm going back through the posts to pick up some new reading material for the collection and the Champagne Books link returns a 404 error message.
Click to expand...

I might need to go back and look at the links. I know that they spun off their sci-fi titles to their BURST imprint several years back, but recently, I think I saw where they were going to be bringing those titles back into the main site.

I try to keep my main site's links up-to-date (including the ones for this book) when they change...so that's probably the best bet.

Staff member
So apparently my buy from Amazon is not exactly working out. I placed an order for Heroes Die Young on April 26 (I'll do what & when I can to support our visiting authors). On April 29th I received an email that "due to a shipping error" the first tracking number I was given for USPS was not valid and they provided a new UPS tracking number. When I check the status of the UPS tracking number it shows an origin scan on April 28th with nothing after. Fast forward to May 7 and I still have no package from Amazon; I've contacted their support group this afternoon for assistance since "Package says it was shipped but never delivered" is not one of their automated options to choose from.

Obviously @astonwest has nothing to do with this but it does act as a good reminder for me why I enjoy my trips to the local bookstores for picking up new reading material. I think my "Someday when I retire..." wish is to open up a local bookstore that serves more for my own reading pleasure that just so happens to have the occasional customer as well.

Writer
Hopefully it's not related to any glitch with getting books from the publisher...

That said, let me know if things go south, and we can work out something toward a signed copy...

Writer
As I mentioned in another recent thread, I now have a new edition of my novel Heroes Die Young, available over at Amazon...hoping to get a paperback copy out later this year. 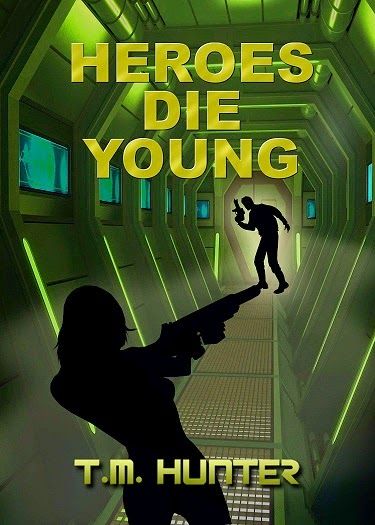 Space pirate Aston West has come across derelict freighters many times before. But this latest catch, fresh out of a recent battle, proves to be a little more than he expected. He can’t fight the urge to pilfer a valuable cache of illegal contraband, but discovers one last stowaway who tries to kill Aston. Attack craft return to finish the ship off and Aston has no choice but to save her from certain destruction.

Who is she? What was this cargo he just took? Why was the freighter destroyed?

Surrounded by a host of old friends, new acquaintances, and desperate enemies, Aston travels from one system to another, getting the answers he wants, but revealing even more questions, and putting his life motto of never getting involved to the ultimate test. Climaxing in an ending for which even Aston is not prepared, the story will have you gasping for breath, and desperate to find out if heroes truly do die young.

Writer
Just FYI, this weekend, you can pick up a copy of Heroes Die Young (as well as my novella Seeker) for free over at Amazon. Enjoy!

Staff member
It took a bit but I finally had a perfect Sunday afternoon to read the first part of the Aston West saga, Heroes Die Young.

It was an enjoyable read with my only complaint being that it felt like the ending was cut pre-maturely. If you've ever watched a mini-series or a two-part TV show and at the end of the first episode you know that you won't get an ending just yet but you still yell at the TV "What, they can't stop it there!", then it'll be a familiar feeling. The Aston West character is intended to be a series and the action continues in Friends in Deed; you're just going to wish you had a copy of it handy after finishing up Heroes.

Since my preferred book reading is via physical copies I need to do a little shopping and wait for the deliveries. You Kindle owners, on the other hand, can load up all at once so I recommend picking as much of the Aston West titles as you can in one shot so you can read them in order as part of a continuous reading session instead of breaking things up. Think of it as "binge reading" instead of "binge watching" on Netflix.

Writer
Glad you enjoyed it!

(I'm a bit surprised that I didn't get a notification about your post, though, since I'm "watching" this thread...hmmm...)

Kevin said:
Since my preferred book reading is via physical copies I need to do a little shopping and wait for the deliveries. You Kindle owners, on the other hand, can load up all at once so I recommend picking as much of the Aston West titles as you can in one shot so you can read them in order as part of a continuous reading session instead of breaking things up. Think of it as "binge reading" instead of "binge watching" on Netflix.
Click to expand...

Now I know why you set up a Kindle app on your Android tablet (from the other thread)...heh.

Writer
So, for those who don't have Kindles, you can now pick up the series of Aston West novels (and my latest standalone short novel, Stormrunner) over at Barnes and Noble...and for a limited time, the first book (Heroes Die Young) is free over there. Enjoy!

Staff member
@astonwest, I think you got a bad link in there for B&N.

Kevin said:
@astonwest, I think you got a bad link in there for B&N.

Maybe I need more caffeine, tonight it works but when I posted that it was going to a page not found error at B&N.