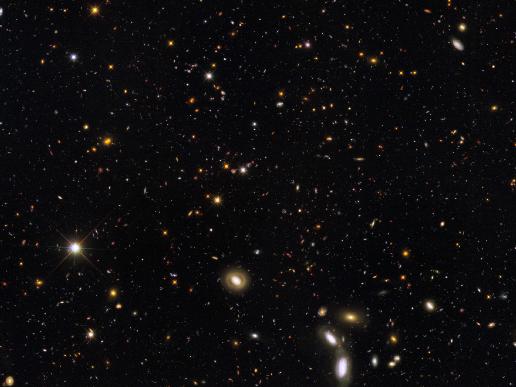 More than 12 billion years of cosmic history are shown in this panoramic, full-color view of thousands of galaxies. This image, taken by NASA's Hubble Space Telescope, was made from mosaics taken in September and October 2009 with the newly installed Wide Field Camera 3 and in 2004 with the Advanced Camera for Surveys and covers a portion of the southern field of a large galaxy census called the Great Observatories Origins Deep Survey, a deep-sky study by several observatories to trace the evolution of galaxies. The image reveals galaxy shapes that appear increasingly chaotic at each earlier epoch, as galaxies grew through accretion, collisions and mergers, which range from the mature spirals and ellipticals in the foreground, to smaller, fainter, irregularly shaped galaxies, most of which are farther away, and therefore existed farther back in time. These smaller galaxies are considered the building blocks of the larger galaxies we see today. The image shows a rich tapestry of 7,500 galaxies stretching back through most of the universe's history. The closest galaxies seen in the foreground emitted their observed light about a billion years ago. The farthest galaxies, a few of the very faint red specks, are seen as they appeared more than 13 billion years ago, or roughly 650 million years after the Big Bang. This mosaic spans a slice of space that is equal to about a third of the diameter of the full moon (10 arc minutes). Image Credit: NASA, ESA, R. Windhorst, S. Cohen, and M. Mechtley (Arizona State University, Tempe), R. O'Connell (University of Virginia), P. McCarthy (Carnegie Observatories), N. Hathi (University of California, Riverside), R. Ryan (University of California, Davis), and H. Yan (Ohio State University) (More at NASA Picture Of The Day)
A

In Search of Truth

It makes one wonder what the space time continuum really is compared to our time frame in the structure of all things. one thing sure is if we traveled to the furthest reaches of space at normal speed of light of 186000 miles per second we would arrive in our time frame and not the time frame seen or estimated in the picture.