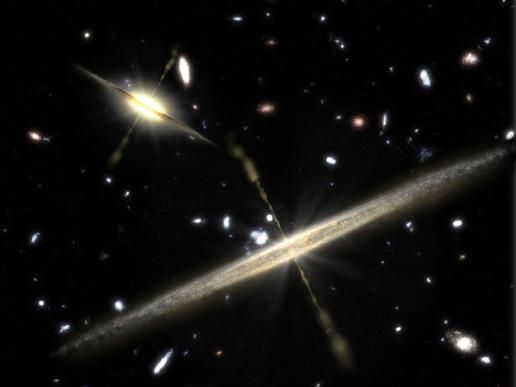 This artist's concept illustrates the two types of spiral galaxies that populate our universe: those with plump middles, or central bulges (upper left), and those lacking the bulge (foreground). New observations from NASA's Spitzer Space Telescope provide strong evidence that the slender, bulgeless galaxies can, like their chubbier counterparts, harbor supermassive black holes at their cores. Previously, astronomers thought that a galaxy without a bulge could not have a supermassive black hole. In this illustration, jets shooting away from the black holes are depicted as thin streams. The findings are reshaping theories of galaxy formation, suggesting that a galaxy's "waistline" does not determine whether it will be home to a big black hole. Image Credit: NASA (More at NASA Picture Of The Day)