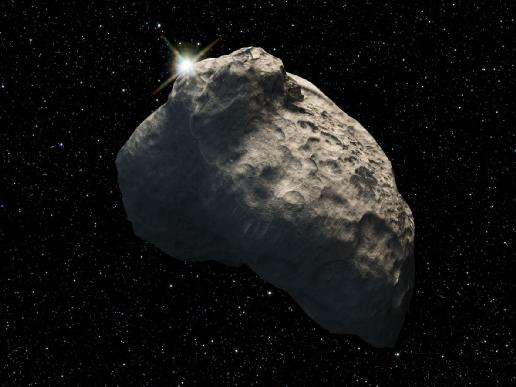 NASA's Hubble Space Telescope has discovered the smallest object ever seen in visible light in the Kuiper Belt, a vast ring of icy debris that is encircling the outer rim of the solar system just beyond Neptune. This artist's concept of the needle-in-a-haystack object found by Hubble is only 3,200 feet across and a whopping 4.2 billion miles away. The smallest Kuiper Belt Object (KBO) seen previously in reflected light is roughly 30 miles across, or 50 times larger. Hubble observations of nearby stars show that a number of them have Kuiper Belt-like disks of icy debris encircling them. These disks are the remnants of planetary formation. Researchers surmise that over billions of years the debris should collide, grinding the KBO-type objects down to ever smaller pieces that were not part of the original Kuiper Belt population. The finding is a powerful illustration of scientists' ability to use archived Hubble data to produce important new discoveries. Image Credit: NASA (More at NASA Picture Of The Day)