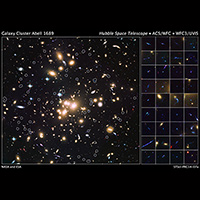 Scientists have long suspected there must be a hidden population of small, faint galaxies that were responsible during the universe's early years for producing a majority of stars now present in the cosmos. At last Hubble has found them in the deepest ultraviolet-light exposures made of the early universe. This underlying population is 100 times more abundant in the universe than their more massive cousins that were detected previously. (More at Hubble Site)

Electronic Book for Students with Visual Impairments Reaches for the Stars 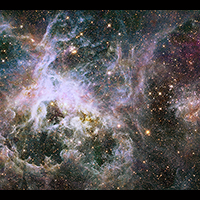 Get larger image formats
This huge Hubble Space Telescope mosaic, spanning a width of 600 light-years, shows a star factory of more the 800,000 stars being born. The stars are embedded inside the Tarantula Nebula, a vibrant region of star birth that resides 170,000 light-years away in the Large Magellanic Cloud, a small, satellite galaxy of our Milky Way. Hubble's near-infrared sensitivity allows astronomers to see behind clouds of dust in the nebula to unveil where the newborn stars are clustered. (More at Hubble Site)
Last edited by a moderator: Nov 20, 2021 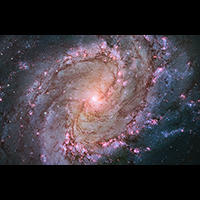 Get larger image formats
The vibrant magentas and blues in this Hubble image of the barred spiral galaxy M83 reveal that the galaxy is ablaze with star formation. The galactic panorama unveils a tapestry of the drama of stellar birth and death. The galaxy, also known as the Southern Pinwheel, lies 15 million light-years away in the constellation Hydra. (More at Hubble Site) 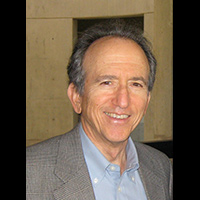 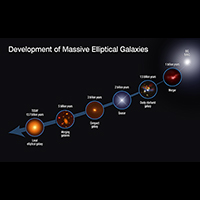 Get larger image formats
A certain class of massive galaxies in the early universe lived fast and died young. By "died" astronomers mean that the galaxies had completed building stars just 3 billion years after the big bang. By contrast, our 12-billion-year-old Milky Way galaxy continues making stars today. When star formation stops, the aging stellar population looks redder in the star-forming galaxies that are more bluish. The nickname for the essentially "burned-out" galaxies is "red and dead." (More at Hubble Site) 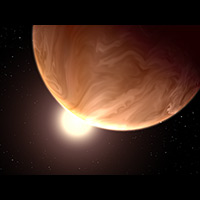 Get larger image formats
Weather forecasters on a pair of exoplanets would have an easy job. Today's forecast: cloudy. Tomorrow: overcast. Extended outlook: more clouds. Scientists using the Hubble Space Telescope have characterized the atmospheres of two of the most common type of planets in the Milky Way galaxy and found both may be blanketed with clouds. The best guess is that the clouds are not like anything found on Earth. Their scorching atmospheres are predicted to be hundreds of degrees Fahrenheit too hot for a rainy day. (More at Hubble Site) 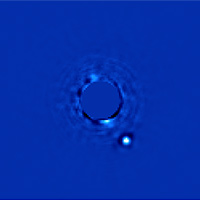 Get larger image formats
Space Telescope Science Institute astronomers have been involved in nearly a decade of development, construction, and testing of the world's most advanced instrument for directly photographing and analyzing planets around other stars. Called the Gemini Planet Imager (GPI), the instrument will be used to photograph faint planets next to bright stars and probe their atmospheres, and to study dusty disks around young stars. GPI was used to image Beta Pictoris b, a planet orbiting the star Beta Pictoris. The bright star Beta Pictoris is hidden behind a mask in the center of the image that blocks out the glare of the central star. (More at Hubble Site) 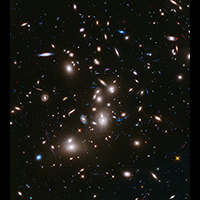 Get larger image formats
With the help of a natural "zoom lens" in space, Hubble astronomers are looking farther than anyone has before. The ambitious, collaborative, multiyear program among NASA's Great Observatories is called The Frontier Fields. The first of a set of unprecedented, super-deep views of the universe contain images of some of the intrinsically faintest and youngest galaxies ever detected. This is just the first of several primary target fields in the program. The immense gravity in this foreground galaxy cluster, Abell 2744, warps space to brighten and magnify images of far-more-distant background galaxies as they looked over 12 billion years ago, not long after the big bang. The Hubble exposure reveals nearly 3,000 of these background galaxies interleaved with images of hundreds of foreground galaxies in the cluster. (More at Hubble Site) 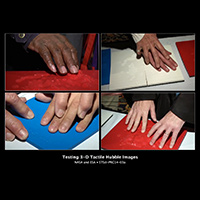 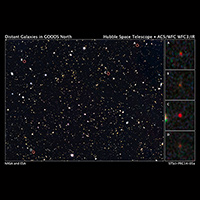 Get larger image formats
NASA's Hubble Space Telescope and Spitzer Space Telescope joined forces to discover and characterize four unusually bright galaxies as they appeared more than 13 billion years ago, just 500 million years after the big bang. Although Hubble has previously identified galaxies at this early epoch, astronomers were surprised to find objects that are about 10 to 20 times more luminous than anything seen previously. (More at Hubble Site) 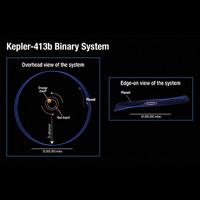 Get larger image formats
Imagine living on a planet with seasons so unpredictable you would hardly know what to wear: Bermuda shorts or a heavy overcoat! That's the situation on a weird world found by NASA's planet-hunting Kepler space telescope. The planet, designated Kepler-413b, is located 2,300 light-years away in the constellation Cygnus. It circles a close pair of orange and red dwarf stars every 66 days. But what makes this planet very unusual is that it wobbles, or precesses, wildly on its spin axis, much like a child's top. The planet's orbit is tilted with respect to the plane of the binary star's orbit. Over an 11-year period, the planet's orbit too would appear to wobble as it circles around the star pair. All of this complex movement leads to rapid and erratic changes in seasons. (More at Hubble Site) 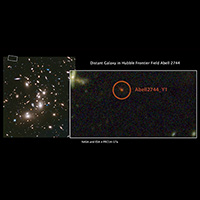 Get larger image formats
An international team led by astronomers from the Instituto de Astrofisica de Canarias (IAC) and La Laguna University (ULL) has just released the first analysis of the observations of the Abell 2744 cluster of galaxies, a coordinated program of the Hubble and Spitzer space telescopes. They have discovered one of the most distant galaxies known to date, which clearly shows the potential of the multi-year Frontier Fields project. The project uses a phenomenon called "gravitational lensing" where select foreground galaxy clusters amplify the faint light from far-more-distant background objects. By combining Hubble and Spitzer data, these astrophysicists have determined the properties of this young galaxy with a better precision than previous studies of other samples at similar cosmic epochs. This galaxy, named Abell2744_Y1, is about 30 times smaller than our galaxy, the Milky Way, but is producing at least 10 times more stars. From Earth, this galaxy is seen as it was 650 million years after the big bang. It is one of the brightest galaxies discovered at such a lookback time, say researchers. This study provides new constraints on the density and properties of the galaxies in the early universe. These results are accepted for publication in the scientific journal Astronomy and Astrophysics Letters. (More at Hubble Site) 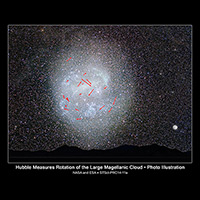 Get larger image formats
Using the sharp-eyed NASA Hubble Space Telescope, astronomers have for the first time precisely measured the rotation rate of a galaxy based on the clock-like movement of its stars. (More at Hubble Site) 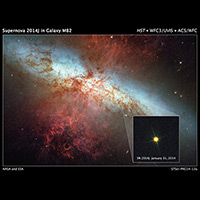 Get larger image formats
This is a Hubble Space Telescope composite image of a supernova explosion designated SN 2014J in the galaxy M82, at a distance of approximately 11.5 million light-years from Earth. Astronomers using a ground-based telescope discovered the explosion on January 21, 2014. This Hubble photograph was taken on January 31, as the supernova approached its peak brightness. (More at Hubble Site)

Life Is Too Fast, Too Furious for This Runaway Galaxy 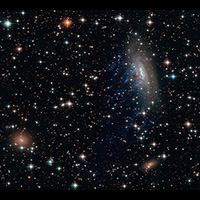 Get larger image formats
Our spiral-shaped Milky Way galaxy lives in a comparatively quiet backwater region of the universe. This is not the case for galaxies crammed together inside huge clusters. As they zip around within a cluster, gas can be pulled from their disks due to a process called ram pressure stripping. Galaxy ESO 137-001 is one example. The star-city looks like it is "leaking" as it plunges through the Norma galaxy cluster. (More at Hubble Site) 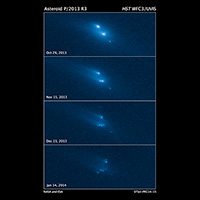 Get larger image formats
Though fragile comet nuclei have been seen falling apart as they near the Sun, nothing like the slow breakup of an asteroid has ever before been observed in the asteroid belt. A series of Hubble Space Telescope images shows that the fragments are drifting away from each other at a leisurely one mile per hour. This makes it unlikely that the asteroid is disintegrating because of a collision with another asteroid. A plausible explanation is that the asteroid is crumbling due to a subtle effect of sunlight. This causes the rotation rate to slowly increase until centrifugal force pulls the asteroid apart. The asteroid's remnant debris, weighing in at 200,000 tons, will in the future provide a rich source of meteoroids. (More at Hubble Site)

Or it was in the way of a ship in the vicinity that fired a few asteroid destroying weapons at it. 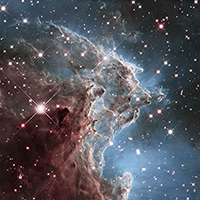 Get larger image formats
This colorful Hubble Space Telescope mosaic of a small portion of the Monkey Head Nebula unveils a collection of carved knots of gas and dust silhouetted against glowing gas. The cloud is sculpted by ultraviolet light eating into the cool hydrogen gas. As the interstellar dust particles are warmed from the radiation from the stars in the center of the nebula, they heat up and begin to glow at infrared wavelengths, as captured by Hubble. The space photo superficially resembles the "The Great Wave" print by 19th century Japanese artist Katsushika Hokusai. (More at Hubble Site) 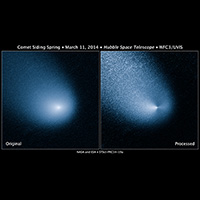 Get larger image formats
Comet Siding Spring is plunging toward the Sun along a roughly 1-million-year orbit. The comet, discovered in 2013, was within the radius of Jupiter's orbit when the Hubble Space Telescope photographed it on March 11, 2014. Hubble resolves two jets of dust coming from the solid icy nucleus. These persistent jets were first seen in Hubble pictures taken on Oct. 29, 2013. The feature should allow astronomers to measure the direction of the nucleus's pole, and hence, rotation axis. The comet will make its closest approach to our Sun on Oct. 25, 2014, at a distance of 130 million miles, well outside Earth's orbit. On its inbound leg, Comet Siding Spring will pass within 84,000 miles of Mars on Oct. 19, 2014, which is less than half the Moon's distance from Earth. The comet is not expected to become bright enough to be seen by the naked eye. (More at Hubble Site)