Less than a billion years after the big bang, a monster black hole began devouring anything within its gravitational grasp. This triggered a firestorm of star formation around the black hole. A galaxy was being born. A blowtorch of energy, equivalent to the light from 600 trillion Suns, blazed across the universe. Now, 12.8 billion years later, the Hubble Space Telescope captured the beacon from this event. But Hubble astronomers needed help to spot it. The gravitational warping of space by a comparatively nearby intervening galaxy greatly amplified and distorted the quasar's light, making it the brightest such object seen in the early universe. It offers a rare opportunity to study a zoomed-in image of how supermassive black holes accompanied star formation in the very early universe and influenced the assembly of galaxies. 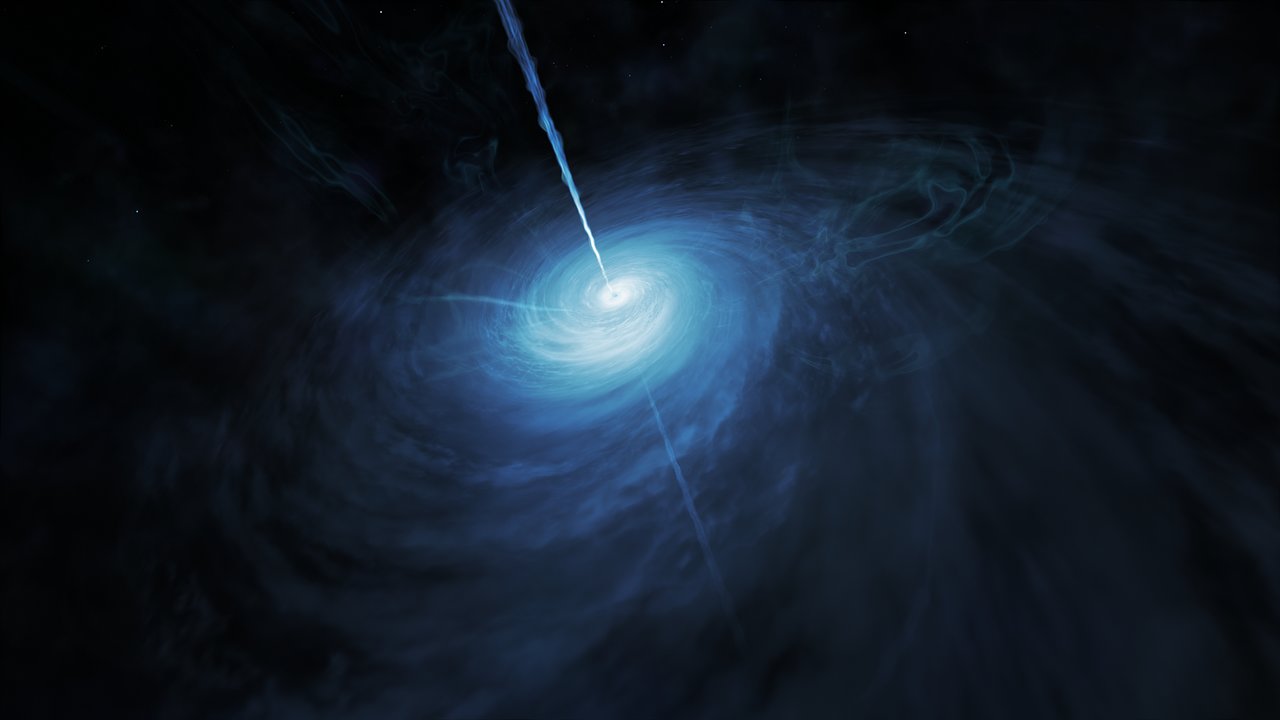 The NASA/ESA Hubble Space Telescope has discovered the brightest quasar ever seen in the early Universe. After 20 years of searching, astronomers have identified the ancient quasar with the help of strong gravitational lensing. This unique object provides an insight into the birth of galaxies when the Universe was less than a billion years old.

NASA's Hubble Space Telescope has uncovered a cluster of galaxies in the initial stages of construction – the most distant such grouping ever observed in the early universe.

In a random sky survey made in near-infrared light, Hubble spied five tiny galaxies clustered together 13.1 billion light-years away. They are among the brightest galaxies at that epoch and very young, existing just 600 million years after the universe's birth in the big bang.

Peering deep inside the hub of the neighboring Andromeda galaxy, NASA's Hubble Space Telescope has uncovered a large, rare population of hot, bright stars. While Hubble has spied these ultra-blue stars before in Andromeda, the new observation covers a much broader area, revealing that these stellar misfits are scattered throughout the galaxy's bustling center.

Astronomers used Hubble's Wide Field Camera 3 to find roughly 8,000 of the ultra-blue stars in a stellar census made in ultraviolet light, which traces the glow of the hottest stars. The study is part of the multi-year Panchromatic Hubble Andromeda Treasury survey to map stellar populations across the Andromeda galaxy. The team's results are being presented today at the American Astronomical Society meeting in Austin, Texas.

Hubble Zooms in on Double Nucleus in Andromeda Galaxy

A new Hubble Space Telescope image centers on the 100-million-solar-mass black hole at the hub of the neighboring spiral galaxy M31, or the Andromeda galaxy, one of the few galaxies outside the Milky Way visible to the naked eye and the only other giant galaxy in the Local Group. This is the sharpest visible-light image ever made of the nucleus of an external galaxy.

The Hubble image is being presented today at the meeting of the American Astronomical Society in Austin, Texas.

Our Milky Way galaxy contains a minimum of 100 billion planets according to a detailed statistical study based on the detection of three extrasolar planets by an observational technique called microlensing.

Kailash Sahu, of the Space Telescope Science Institute in Baltimore, Md., is part of an international team reporting today that our galaxy contains a minimum of one planet for every star on average. This means that there is likely to be a minimum of 1,500 planets within just 50 light-years of Earth.

In its February 2012 issue, Baltimore Magazine has cited the Space Telescope Science Institute (STScI) as one of the best places to work in metropolitan Baltimore.

Hubble Zooms in on a Magnified Galaxy

A team of astronomers aimed Hubble at one of the most striking examples of gravitational lensing, a nearly 90-degree arc of light in the galaxy cluster RCS2 032727-132623. Hubble's view of the distant background galaxy, which lies nearly 10 billion light-years away, is significantly more detailed than could ever be achieved without the help of the gravitational lens.

This observation provides a unique opportunity to study the physical properties of a galaxy vigorously forming stars when the universe was only one-third its present age. The results have been accepted for publication in The Astrophysical Journal.

NASA's Hubble Spots a Relic from a Shredded Galaxy

Astronomers using NASA's Hubble Space Telescope may have found evidence for a cluster of young, blue stars encircling HLX-1, one of the first intermediate-mass black holes ever discovered. Astronomers believe the black hole may once have been at the core of a now-disintegrated dwarf galaxy. The discovery of the black hole and the possible star cluster has important implications for understanding the evolution of supermassive black holes and galaxies.

Astronomers observed what appeared to be a clump of dark matter left behind during a bizarre wreck between massive clusters of galaxies. The dark matter collected into a "dark core" containing far fewer galaxies than would be expected if the dark matter and galaxies hung together. Most of the galaxies apparently have sailed far away from the collision. This result could present a challenge to basic theories of dark matter, which predict that galaxies should be anchored to the invisible substance, even during the shock of a collision.

The initial observations, made in 2007, were so unusual that astronomers shrugged them off as unreal, due to poor data. However, new results obtained in 2008 from NASA's Hubble Space Telescope confirm that dark matter and galaxies parted ways in the gigantic merging galaxy cluster called Abell 520, located 2.4 billion light-years away. Now, astronomers are left with the challenge of trying to explain dark matter's seemingly oddball behavior in this cluster.

Several million young stars are vying for attention in this NASA Hubble Space Telescope image of a raucous stellar breeding ground in 30 Doradus, located in the heart of the Tarantula Nebula. 30 Doradus is the brightest star-forming region visible in a neighboring galaxy and home to the most massive stars ever seen. The nebula resides 170,000 light-years away in the Large Magellanic Cloud, a small, satellite galaxy of our Milky Way. No known star-forming region that is inside our Milky Way is as large or as prolific as 30 Doradus.

The image comprises one of the largest mosaics ever assembled from Hubble photos and includes observations taken by Hubble's Wide Field Camera 3 and Advanced Camera for Surveys. Hubble made the observations in October 2011. NASA and the Space Telescope Science Institute are releasing the image to celebrate Hubble's 22nd anniversary.

These are among the first clear images, taken from the distance of Earth, to show aurorae on the planet Uranus. This composite image combines 2011 Hubble observations of the aurorae in visible and ultraviolet light, 1986 Voyager 2 photos of the cyan disk of Uranus as seen in visible light, and 2011 Gemini Observatory observations of the faint ring system as seen in infrared light.

Astronomers have gathered the most direct evidence yet of a supermassive black hole shredding a star that wandered too close. NASA's Galaxy Evolution Explorer, a space-based observatory, and the Pan-STARRS1 telescope on the summit of Haleakala in Hawaii were the first to the scene of the crime, helping to identify the stellar remains.

Hubble to Use Moon as Mirror to See Venus Transit

This mottled landscape showing the impact crater Tycho is among the most violent-looking places on our Moon. Astronomers didn't aim NASA's Hubble Space Telescope to study Tycho, however. The image was taken in preparation to observe the transit of Venus across the Sun's face on June 5-6.

Hubble cannot look at the Sun directly, so astronomers are planning to point the telescope at Earth's moon, using it as a mirror to capture reflected sunlight and isolate the small fraction of the light that passes through Venus's atmosphere. Imprinted on that small amount of light are the fingerprints of the planet's atmospheric makeup. These observations will mimic a technique that is already being used to sample the atmospheres of giant planets outside our solar system passing in front of their stars. In the case of the Venus transit observations, astronomers already know the chemical makeup of Venus's atmosphere, and that it does not show signs of life on the planet. But the Venus transit will be used to test whether this technique will have a chance of detecting the very faint fingerprints of an Earth-like planet, even one that might be habitable for life, outside our solar system that similarly transits its own star. Venus is an excellent proxy because it is similar in size and mass to our planet.

NASA astronomers announced Thursday they can now predict with certainty the next major cosmic event to affect our galaxy, Sun, and solar system: the titanic collision of our Milky Way galaxy with the neighboring Andromeda galaxy.

The Milky Way is destined to get a major makeover during the encounter, which is predicted to happen four billion years from now. It is likely the Sun will be flung into a new region of our galaxy, but our Earth and solar system are in no danger of being destroyed.

An international team of astronomers using data from the NASA's Hubble Space Telescope has made an unparalleled observation, detecting significant changes in the atmosphere of a planet located beyond the solar system. The scientists conclude that the atmospheric variations occurred in response to a powerful eruption on the planet's host star, an event observed by NASA's Swift satellite. This artist's rendering illustrates the evaporation of exoplanet HD 189733b's atmosphere in response to the powerful eruption from its host star on Sept. 7, 2011. Hubble detected the escaping gases, and Swift caught the stellar flare.

Monster Galaxy May Have Been Stirred Up By Black-hole Mischief

Astronomers using NASA's Hubble Space Telescope have obtained a remarkable new view of a whopper of an elliptical galaxy that may have been puffed up by the actions of one or more black holes in its core. The galaxy's core measures about 10,000 light-years and is the largest yet seen.

NASA's Hubble Confirms that Galaxies Are the Ultimate Recyclers

Galaxies learned to "go green" early in the history of the universe, continuously recycling immense volumes of hydrogen gas and heavy elements to build successive generations of stars stretching over billions of years. In other words they are more fuel efficient than any hybrid car on the road. This ongoing recycling keeps galaxies from emptying their "fuel tanks" and therefore stretches out their star-forming epoch to over 10 billion years. The catch is that those galaxies that crank up the rate of star formation can blow away their remaining fuel, essentially turning off further star-birth activity. But galaxies like our Milky Way that frugally pace the rate of star birth can go on building new stars at least one billion years into the future.

This conclusion is based on a series of Hubble Space Telescope observations that flexed the special capabilities of its comparatively new Cosmic Origins Spectrograph (COS) to detect otherwise invisible mass in the halo of our Milky Way and a sample of more than 40 other galaxies. The three studies investigated different aspects of the gas-recycling phenomenon in galaxies. The results are being published in three papers in the November 18 issue of Science magazine.

An international team of astronomers using the European Southern Observatory's Very Large Telescope have found the fastest spinning star ever discovered. VFTS 102 rotates at a dizzying 1 million miles per hour and is very close to the point at which it would be torn apart due to centrifugal forces. The star lies in a neighboring dwarf galaxy, the Large Magellanic Cloud, about 160,000 light-years from Earth. Astronomers think that it may have had a violent past and has been ejected from a double star system by its exploding companion. The team will use NASA's Hubble Space Telescope to make precise measurements of the star's proper motion across space.