NASA's Hubble Space Telescope is witnessing a grouping of galaxies engaging in a slow dance of destruction that will last for billions of years. The galaxies are so tightly packed together that gravitational forces are beginning to rip stars from them and distort their shapes. Those same gravitational forces eventually could bring the galaxies together to form one large galaxy. The name of this grouping, Seyfert's Sextet, implies that six galaxies are participating in the action. But only four galaxies are on the dance card. The small face-on spiral with the prominent arms
of gas and stars is a background galaxy almost five times farther away than the other four. Only a chance alignment makes it appear as if it is part of the group. The sixth member of the sextet isn't a galaxy at all but a long "tidal tail" of stars [below, right] torn from one of the galaxies.

A Tiny Galaxy is Born

New detailed images from NASA's Hubble Space Telescope show a "late-blooming" galaxy, a small, distorted system of gas and stars that still appears to be in the process of development, even though most of its galactic cousins are believed to have started forming billions of years ago. Evidence of the galaxy's youthfulness can be seen in the burst of newborn stars and its disturbed shape. This evidence indicates that the galaxy, called POX 186, formed when two smaller clumps of gas and stars collided less than 100 million years ago (a relatively recent event in the universe's 13-billion-year history), triggering more star formation. Most large galaxies, such as our Milky Way, are thought to have formed the bulk of their stars billions of years ago.

To celebrate the 21st anniversary of the Hubble Space Telescope's deployment into space, astronomers at the Space Telescope Science Institute in Baltimore, Md., pointed Hubble's eye at an especially photogenic pair of interacting galaxies called Arp 273. The larger of the spiral galaxies, known as UGC 1810, has a disk that is distorted into a rose-like shape by the gravitational tidal pull of the companion galaxy below it, known as UGC 1813. This image is a composite of Hubble Wide Field Camera 3 data taken on December 17, 2010, with three separate filters that allow a broad range of wavelengths covering the ultraviolet, blue, and red portions of the spectrum. 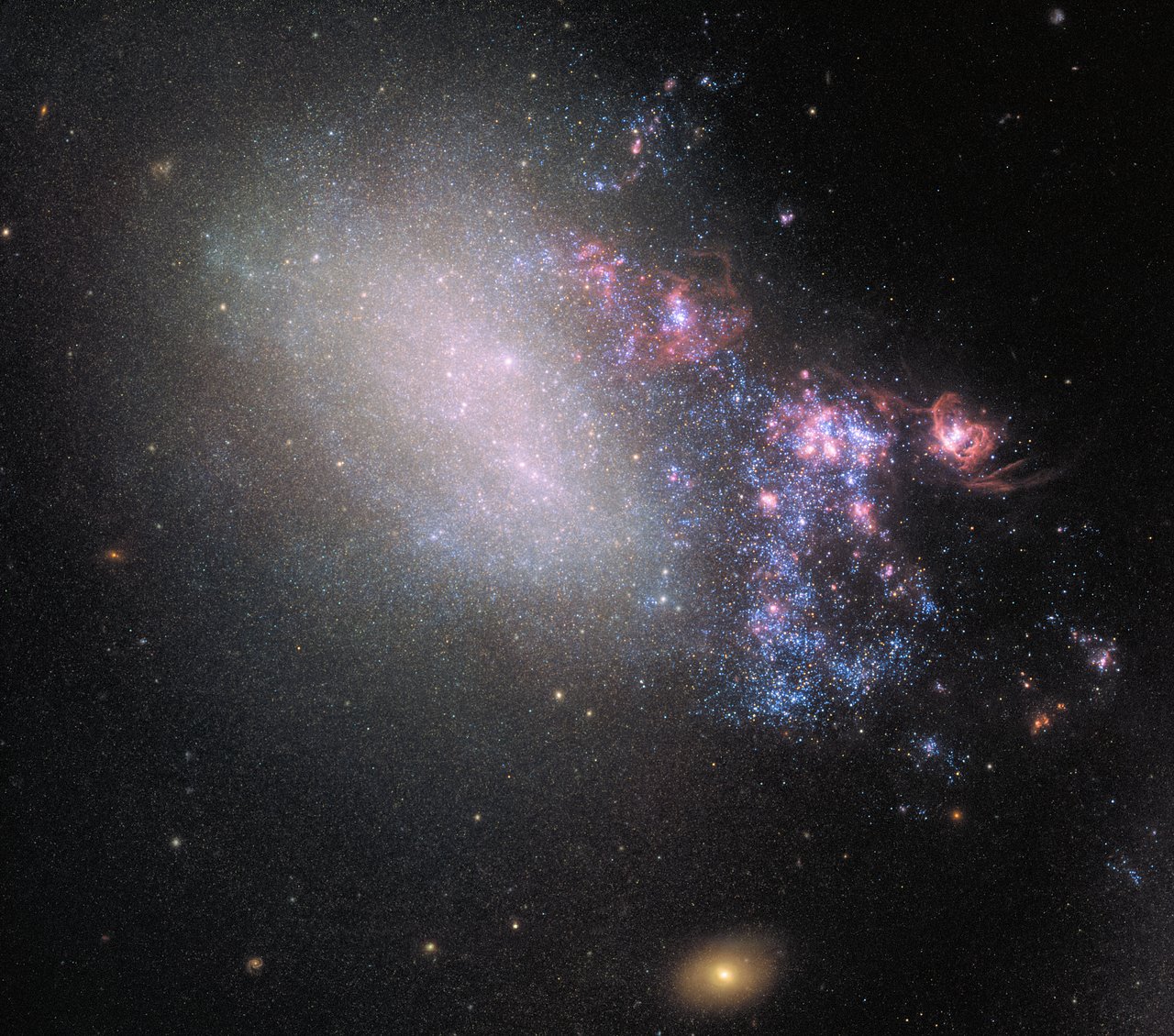 The NASA/ESA Hubble Space Telescope has taken a new look at the spectacular irregular galaxy NGC 4485, which has been warped and wound by its larger galactic neighbour. The gravity of the second galaxy has disrupted the ordered collection of stars, gas and dust, giving rise to an erratic region of newborn, hot, blue stars and chaotic clumps and streams of dust and gas.

Evolution of the P/Shoemaker-Levy 9 "Gang of Four" Region

This series of eight NASA Hubble Space Telescope "snapshots" shows the evolution of the P-Q complex, also called the "gang of four" region, of comet P/Shoemaker-Levy 9.

The eight individual frames chronicle changes in the comet during the 12 months before colliding with Jupiter. The sequence shows that the relative separations of the various cometary fragments, thought to range in size from about 500 meters to almost 4 km (2.5 miles) across, changed dramatically over this period. The apparent separation of Q1 and Q2 was only about 1100 kilometers (680 miles) on 1 July 1993 and increased to 28,000 kilometers (17,400 miles) by 20 July 1994.

These four NASA Hubble Space Telescope images of Jupiter, as seen in visible (violet) and far-ultraviolet (UV) wavelengths, show the remarkable spreading of the clouds of smoke and dust thrown into the atmosphere after the impacts of the fragments of comet P/Shoemaker-Levy 9. These dark regions provide the only information ever obtained on the wind direction and speed in Jupiter's upper atmosphere.

In the Jupiter campaign, scientists wanted to see how the comet collisions affected the Jovian aurorae, rapid and irregular displays of colorful light in a planet's night sky caused by the leakage of charged particles from the magnetosphere into the atmosphere. Following the impacts, some of the resulting debris became electrically charged and traveled along Jupiter's magnetic field lines and created new aurorae in Jupiter's northern hemisphere, as shown in this image. Scientists had never before observed aurorae this far south of where aurorae are typically seen in Jupiter's northern hemisphere.

This series of color-composite maps of Jupiter, assembled from images taken with NASA's Hubble Space Telescope, allows astronomers to trace changes in the dark impact sites that resulted from the July 1994 impact of comet P/Shoemaker-Levy 9 with the giant planet. Through computer image processing, researchers "peel" the atmosphere of Jupiter off its globe and spread it flat into a map. These cylindrical projections show the entire atmosphere of Jupiter in one map. The HST's images show clearly that dark material produced in the comet explosion has continued to spread in Jupiter's atmosphere. However, the "band" of dark material is still clumpy, which suggests that the major impact sites are still localized and, so, can still be identified.

In the weeks following comet P/Shoemaker-Levy 9's spectacular July collision with Jupiter, a team of Hubble telescope astronomers has pored over imaging and spectroscopic data gleaned during the interplanetary bombardment. Their initial findings, combined with results from other space-borne and ground-based telescopes, shed new light on Jupiter's atmospheric winds, its immense magnetic field, the mysterious dark debris from the impacts, and the composition of the doomed comet itself.

These four Hubble telescope images of Jupiter, as seen in visible and far-ultraviolet wavelengths, show the remarkable dispersion of the clouds of smoke and dust thrown into the atmosphere after chunks of the comet slammed into Jupiter's southern region. These dark regions provide the only information ever obtained on the wind direction and speed in Jupiter's upper atmosphere.

Astronomers using the Hubble telescope have announced the most accurate distance measurement yet to the remote galaxy M100, located in the Virgo cluster of galaxies.

This measurement will help provide a precise calculation of the expansion rate of the universe, called the Hubble Constant, which is crucial to determining the age and size of the universe. They calculated the distance - 56 million light-years - by measuring the brightness of several Cepheid variable stars in the galaxy. Cepheid variables are a class of pulsating star used as "milepost markers" to calculate the distance to nearby galaxies. The bottom image shows a region of M100. This Hubble telescope image is a close-up of a region of the galaxy M100. The top three frames, taken over several weeks, reveal the rhythmic changes in brightness of a Cepheid variable.

Hubble Observes the Moons and Rings of the Planet Uranus

This Hubble telescope snapshot of the planet Uranus reveals the planet's rings, at least five of the inner moons, and bright clouds in the Southern Hemisphere. Hubble allows astronomers to revisit the planet at a level of detail not possible since the Voyager 2 spacecraft flew by the planet briefly, nearly a decade ago.

This picture is a combination of images showing the motion of the inner moons. Each inner moon appears as a string of three dots. Thanks to Hubble's capabilities, astronomers will be able to precisely determine the moons' orbits.

Astronomers Discover Nearby Spiral Galaxy Hidden Behind the Milky Way

An international team of astronomers has uncovered a galaxy in our own cosmic back yard. Though only ten million light-years away (or five times the distance of the Andromeda galaxy - closest assemblage of stars to our Milky Way Galaxy), this newly discovered city of more than 100 billion stars has gone undetected previously because it is hidden from view behind our Milky Way galaxy.

Scientists for the first time have made images of the surface of Saturn's giant, haze-shrouded moon, Titan. They mapped light and dark features over the surface of the satellite during nearly a complete 16-day rotation. One prominent bright area they discovered is a surface feature 2,500 miles across, about the size of the continent of Australia.

Titan, which is larger than Mercury and slightly smaller than Mars, is the only body in the solar system, other than Earth, that may have oceans and rainfall on its surface. The oceans and rain are composed of ethane-methane rather than water.

Astronomers using the Hubble telescope as a "time machine" have obtained the clearest views yet of distant galaxies that existed when the universe was a fraction of its current age.

A series of remarkable pictures, spanning the life history of the cosmos, are providing the first clues to the life history of galaxies. The Hubble results suggest that elliptical galaxies developed remarkably quickly into their present shapes. However, spiral galaxies that existed in large clusters evolved over a much longer period - the majority being built and then torn apart by dynamic processes in a restless universe. These pictures of faraway galaxies, located 5 to 10 billion light-years from Earth, illustrate the findings.

This Hubble telescope picture of Saturn captures a rare storm that appears as a white arrowhead-shaped feature near the planet's equator. An upwelling of warmer air, similar to a terrestrial thunderhead, generates the storm.

The east-west extent of this storm is equal to the diameter of the Earth (about 7,900 miles). Hubble provides new details about the effects of Saturn's prevailing winds on the storm. These winds shape a dark "wedge" that eats into the left side of the bright central cloud. The new image shows that the storm's motion and size have changed little since its discovery in September 1994.

Hubble Finds One of the Smallest Stars in the Universe

The Hubble telescope's crisp vision has captured a first-time view of one of the smallest stars in our Milky Way Galaxy. Called Gliese 623b or Gl623b, the diminutive star [right of center] is 10 times less massive than the Sun and 60,000 times fainter. (If it were as far away as the Sun, it would be only eight times brighter than the full Moon).

Located 25 light-years from Earth in the constellation Hercules, Gl623b is the smaller component of a double-star system, where the separation between the two members is only twice the distance between Earth and the Sun (approximately 200 million miles). The small star completes one orbit around its larger companion every four years.

The observations, made with the Hubble telescope, have identified a gas cloud that acts as a natural ultraviolet laser near the huge, unstable star called Eta Carinae ? one of the most massive and energetic stars in our Milky Way Galaxy. The interstellar laser may result from Eta Carinae's violently chaotic eruptions, in which it blasts parts of itself out into space, like an interstellar geyser. This illustration depicts a gas cloud
, which acts as a natural ultraviolet laser near Eta Carinae
.

A rare and spectacular head-on collision between two galaxies appears in this Hubble telescope picture of the Cartwheel Galaxy, located 500 million light-years from Earth in the constellation Sculptor.

The striking ring-like feature is a direct result of a smaller intruder galaxy - possibly one of two objects to the right of the ring - that careened through the core [close-up image at lower left] of the host galaxy. Like a rock tossed into a lake, the collision sent a ripple of energy into space, plowing gas and dust in front of it. Expanding at 200,000 mph, this cosmic tsunami leaves in its wake a firestorm of new star creation. Hubble resolves bright blue knots that are gigantic clusters of newborn stars [close-up image at upper left] and immense loops and bubbles blown into space by exploding stars (called supernovae) going off like a string of firecrackers.

The Hubble telescope has uncovered surprising evidence that powerful magnetic fields may exist around the lowest mass stars in the universe, which barely have enough nuclear fuel to burn as stars.

Hubble detected a high-temperature outburst, called a flare, on the surface of the extremely small, cool red dwarf star Van Biesbroeck 10, also known as Gliese 752B. Stellar flares are caused by intense, twisted magnetic fields that accelerate and contain gases that are much hotter than a star's surface. The illustration demonstrates the complex nature of this star.