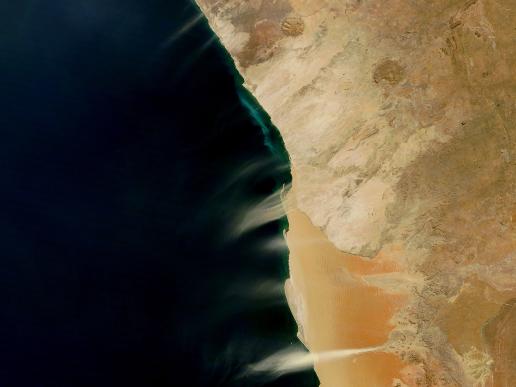 Cloudless skies allowed a clear view of dust and hydrogen sulfide plumes along the coast of Namibia in early August 2010. The Moderate Resolution Imaging Spectroradiometer (MODIS) on NASA’s Terra satellite captured this natural-color image on Aug. 10, 2010. Multiple dust plumes blow off the coast toward the ocean, most or all of them probably arising from streambeds. Unlike the reddish-tan sands comprising the dunes directly south of the Kuiseb River, the stream-channel sediments are lighter in color. Wind frequently pushes dust plumes seaward along the Namibian Coast. Easterly trade winds blow from the Indian Ocean over the African continent, losing much of their moisture as they go. The winds are hot and dry as they pass over Namibia’s coastal plain, where they are prone to stir fine sediments. Even with dust plumes overhead, the marked change in land cover is obvious along the Kuiseb River. South of the river, sand dunes predominate, but the vegetation along the Kuiseb River prevents the dunes from advancing northward. North of the river, the land surface consists primarily of gravel plains punctuated by rocky hills. Hydrogen sulfide appears as a swath of irridescent green running parallel to the coast north of Walvis Bay. A 2009 study linked the emissions in this region to ocean currents, biological activity in the water column, and carbon-rich organic sediments under the water column. The meeting of hydrogen sulfide gas and oxygen-rich surface waters causes pure sulfur to precipitate into the water. The sulfur’s yellow color makes the water appear green to the satellite sensor. Image Credit: NASA (More at NASA Picture Of The Day)

Space Of Dust and Creation