Ok i have already seen it...I actually saw it about a week ago.

Well i LOVED the movie..great work by will smith..And good luck with your plans to become President...

Know i just have one thing plauging my mind...Another annoying what if senario...

So im going to do some research..Gather up ship names etc...and put togethor a list of ships, number of people and what would you do..oh ill also wait till others see the movie until i inform you of there weakness.

Im thinking of maybe a mixture of Naval and Civilian ships....Like BSG.

Just update..i have come up with some military vessels..not sure what to use..It would be impossible to use them all due to fact that only about .2% of worlds populations was immune....So very few ships would be able to be used to there full ability..But putting togethor crews and also recruiting in civilians....and abandoning some ships etc...we may have....

Know i looked at the Russian navy and well there ships lets face it are useless, would couse more harm than good so no way i would use there stuff, Still need to look at the European area etc..
the US stuff is alot but from wht i know there navy falls apart anyway, So only limited stuff could be used.

USN
Aircraft carrier
Nimitz
There is possibly other Nimitz class carriers adrift out at sea or docked in ports, Be aware of the dangers that may lurk inside them if you try and claim them.
Enterprise
John F. Kennedy
Kitty Hawk

Guided missle cruiser
Ticonderoga class
27 in total.....Assume a few are out some where in the ocean with skelaton crews

I got to go for know but i will be back with more military and civilian ships....keep in mind many of these ships will be useless due to either lack of crews or properly trained personnal.

USN Ships.......................
(battleship)USS North Carolina(granted, it is from an older class than the two listed above, but it is kept in working condition for a museum ship...and it is from my home state, so it goes on the list)
(destroyers)50+ Arleigh Burke-class......assume that there are several of these ships out on the ocean w/skeleton crews
(littoral combat ships)2--USS Independence and USS Freedom(designed to work close ashore, these ships combine the speed of a corvette/frigate w/the capability to carry two helicopters aboard for SAR, long-range scouting and other purposes)
(amphibious assault ships)--various classes(Tarawa-class, Wasp-class) that can used to rescue people along coastal areas; potential for rescues of personnel from offshore oil rigs[assuming that they've survived by the time someone reaches them)--USS Tarawa, USS Saipan, USS Boxer, USS Bonhomme Richard
(salvage ships)--with conditions as they would be in I Am Legend, it would be imperative to keep a salvage ship near to repair/restore any ships found; USS Safeguard
V

Thansk....well i could have added several more RAN ships but lack of crews would have made it pointless.....however i have several civilians ships......just a few thoe

I still have several more navys i can do....

Im also thinking of adding in some manned forts..for example the the ones in Spain and the Carribean plus through out Europe....

Oh and im hoping not to wreck the movie for people who havnt seen it but i already have an idea for land bases......


A. Scattered motion scensors
B. A line of UV lights along with barbed wire fences
C. 200m deep field loaded with C4 and other explosives to be discharged by remote,
D. Another line of UV lights supported by mobile troops
E. Same as C
F. A 4m high Concrete Steel reinforced wall supported with UV lights, .50 cal Machine guns, and barbed wire 50m infront of the wall.
G. Aireal support consisting of 2 Fighter jets fitted with Napalm and 8 Apache attack helicopters at all times during the night....With the ability to at least double that strenght within 20-30 minutes.
H. Final defence at command bunker..Should be underground with a single Narrow entrance and a large steel door about 100mm thick.

Anyplace where there is a solidly built castle can serve as a fortress(in the book World War Z, there's references following the Great Panic to the British using Windsor Castle and Balmoral as fortresses.....)

Adding to the ship inventory...........
~~(hospital ships)USNS Mercy and USNS Comfort(1 in the Atlantic, 1 in the Pacific)
~~(coastal patrol ships)USS Hurricane, Typhoon, Sirocco, Squall, Chinook, Firebolt, Whirlwind and Thunderbolt(to be used in a matter similar to the littoral combat ships)
~~(combat replenishment)if they can be turned into multi-purpose ships, then include these as well....at the very least, they can be used as rescue platforms offshore
~~(other ships)I'd add more, but I think you've got a pretty good list in the previous post

As to the land bases........good suggestions; here are a few of my own.......
~~motion detectors at key points of entry/exit manned at all times
~~defense in depth.....if possible, keep an outpost line along major routes into/out of each fortress....if forced to withdraw, then a second line of defensible bunkers(connected underground by tunnels lined w/explosive charges in event of infiltration)...finally, another set of tunnels connecting those bunkers w/the fortress(again, rigged w/explosives)....each outpost should have a telescope/binocular viewsight to check the area around; also, if anyone has sniper experience, place them in one of the outposts so that they can view the area as well
~~mobile defense.......use whatever vehicles are availables(cars, trucks, Humvees', etc), armor them as much as possible, arm w/light machine guns(SAWs, M60s, etc.) and use them for patrol/reinforcement as needed
~~if there are available pilots, use them to man several helicopters(fully-fueled and armed at all times) on an Alert-5 watch(I'd shy away from jet aircraft and instead work on restoring prop-driven planes instead[again, going back to what was done in World War Z; they abandoned pretty much every fancy, expensive fighter jet and went back to prop planes and even dirgibles......)
~~again, I'd add more, but those were some pretty darn' impressive ideas in the previous post.....
V

I only mention the jets due to the fact pretty much the only things that can take off on carrier decks, Plus they take alot less tme to go in drop there load and head back to reload..Also If you have seen the movie you will notice when they find where he is living they go in en mass, Since some jet craft can carry loads of upto 8500kg they would be pretty usefull..But who knows once properly set up we could try out both options.

As for off shore platforms..Im thinking they would be pretty darn useful...Set up main command stations that can be used to link the fortresses and ground bases around the world along with the fleets togethor..That way no way command can fall apart..They are out of reach.

Also occupy key points in the pacific..Several atolls could be used as fleet harbours, While other atolls/islands have natural resources, rice, rubber, fuel, and well metal wont be that necessary couse if we are lucky the MS Berge Stahl carrys something like 400,000 tonns of iron ore...Oh nd the worlds shipping fleet is over 6,500 ships strong so we can scrap alot.

Oh and i would also seriously think about setting up a station to controlle satilites...With the thousands that are in space we would be able to track all movement with 100km of anybase day or night.

Good points......to be fair, I haven't seen the movie yet[I have seen a couple of the trailers for the film, but I hate shelling out money to see a movie in theatres since, in the case of most good films, one only has to wait til' HBO or Cinemax picks up the film and broadcasts it on the small-screen.....]

Throwing in a few additional points.....I made the reference to choppers/prop planes over jet aircraft since, assuming there is a small number of survivors in the Legend world, choppers and prop planes are easier to maintain than jet aircraft(granted, there's a reduction in distance and cargo capacity but one can work around those....)

Also, we seem to agree on the necessity of offshore platforms; most can be outfitted w/satellite equipment to allow for long-range communication between land fortresses and ships(most also have at least one helicopter platform, which can be used to transit personnel/supplies to and from the stations themselves)

Hawaii has to be one of several key Pacific locations that would have to be held at all costs(Guam, Midway, the Bismarck Archipelago, Fiji and the Marshall Islands are other places that come to mind.....)

Finally, one would definitely need to keep a GPS-based tracking system in place, not just for keeping watch on all the bad guys but to also mark locations of possible survivors......there's also the International Space Station; it could also be used as well(provided that facilities for transit to/from are kept up and maintained)......

You could stream it

Won't be seeing it. When Akiva Goldman's name is on it, I avoid it.
V

I see your point when it comes to Jet aircraft, How about maintaning a small group of jet aircraft while the rest are prop planes.

Oh and since ground zero is New york why not situate our main land bases around there, We could occupy any one or all of the 4 Nuclear plants there....And set them up to power night time UV lights, The could be set up to surround New york Preventing and large numbers of enemy getting in or getting out, We could clear out the City either killing or capturing the enemy for experiments to find a cure.

Know once we secure those Islands in the pacific we dont have much to worry about since the creatures are pretty much in capable of operating any sophisticated technology.

As for the INS we may have an issue with lack of properly trained crews, And the fact that it would take more resources than worth while to look after the space side of things.

Oh and as for Prop planes....I think its lake michegan has a steady supply of them, Due to the fact its fresh water the old WW2 planes are in pretty good condition, There are hundreds down there, Even the fuel in the tanks in them still burns.

I guess I should watch the movie eh?
V

Well it would help if you did, You could find out key info if you pay attention. 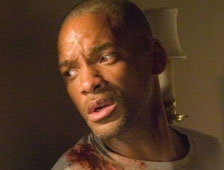 ShockTillYouDrop is reporting that author Richard Matheson has sold the rights to the "I Am Legend" sequel. Matheson wrote the original 1954 novel upon which Will Smith starrer is based on.

The site adds that this does not mean that a sequel is in the works, it simply shows that Warner Bros is securing the rights if they chose to proceed with another installment. If the studio decides to make the film, it would be the first time for the "I Am Legend" material to get a sequel. Two previous films, "The Last Man on Earth" and "The Omega Man," which were both based on Matheson's work, did not get any more installments.

"I Am Legend" hit theaters on December 14th, and quickly set a December record by bringing in $77 million during its domestic opening weekend. At this point, the new film has earned over $335 million in worldwide ticket sales.

Optioning a sequel to I Am Legend is even more proof that this is the worst version yet of any movie adaptation of the book.

Black Mathias said:
Optioning a sequel to I Am Legend is even more proof that this is the worst version yet of any movie adaptation of the book.
Click to expand...

... or at least the most successful for a studio.

I watched it - Ok