Title: Infinite
Author: Carolyn
Status: WIP
Disclaimer: I do not own any of these characters, they are all JJ and Bad Robots.
Thanks: To my beta, Cathy...Janet you well...encouraged this? Katy---> um..just yeah...Ashley..., Loretta for reading
Note: This story does not take place when Syd and Vaughn are children, yet this is a key part of the story. Also, i likely will not be updating this as often as I update Foolish Ways
-WP Made by Janet: thanks hun- 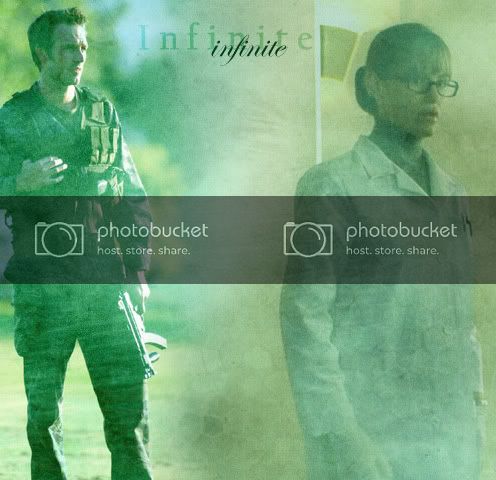 “Mikey! Give me back that red crayon!!!” Sydney screamed.

“Enough!” Bill Vaughn stepped between the fighting six year olds, “Michael you need to go wash your hands for dinner and Sydney I think your mother wants to speak to you”

“Ha-Ha!” Michael shot his tongue out at his best friend.

“Keep that in your mouth of I’ll bite it off!” Sydney glared at him.

“Sorry” Sydney flushed under the eyes of her fathers’ best friend.

“You run along, you can call Michael after dinner” Bill told her.

“Thankies Mr. Vaughn” Sydney hugged him around the waist.

“Say hello to your mother” Bill smiled as he watched the little girl with big brown eyes and brown hair skip off to her house.

“Mommy can I go play with Mikey?” Sydney practically leapt from the table as she shoved her final green bean into her mouth.

“Sydney, maybe Michael wants to play with some of his other friends” Irina smiled at her little girl.

“No way jose!” Sydney shook her head and laughed at her mother, “Where’s Daddy?”

“Daddy is finishing up at the office” Irina told her, “He’ll be home late”

“So why can’t I play with Mikey?” Sydney pouted.

“Sydney, I will call Angela and ask her if she would like to come over, if she chooses to, she may bring Michael” Irina told her.

“And if she says no I can over there?!” Sydney looked at her.

“If you are invited” Irina told her.

“Well huwwy up and call!” Sydney glared at her.

“These two spend every waking moment together” Angela laughed as she sipped a cup of tea while she watched her son and Sydney play a game of Monopoly on the floor.

“I know, tomorrow is going to be hard” Irina let out a long sigh.

“At least they won’t…you know” Angela put a hand on her friends’ shoulder, “It’s for the best”

“In the long term” Irina nodded, “But for the short term, Sydney is going to be heart broken”

“As will Michael” Angela nodded.

“Mommy look!” Sydney squealed as she showed her mother all the money she had collected in the game.

“How early?” Angela asked her.

“I don’t think we have a choice” Angela told her.

“Mommy I don’t understand” Sydney looked at her mother, tears welling in her eyes as they stood out front of their house with a moving truck loading belongings into it, leaving much of the furniture behind.

“Because we have to go” Irina told her.

“Daddy is at the new house” Irina told her.

“But why?” Sydney looked at her.

Sydney nodded, walking over to her best friend, her only friend, “Mikey” she whispered.

“Where are you going?” Michael took his tiny hand and entwined his fingers in her curly pigtail.

“My mommy says I have to say goodbye” Michael looked at her.

“I know” Sydney nodded, “But I pwomise to send you Berney back once I get him fixed”

“You better” Michael looked at her, thinking that like all the other times Sydney had gone on vacation, she would be home in a week or two.

“I pinky swear” Sydney offered her pinky to him.

“Ok Snydey” Michael smiled and they linked their pinky’s a bond that was like no other to a six year old.

“Bye Sydee” Michael clutched her body to his as he hugged his best friend with all of his might, “I’ll see you soon”

“I think Sydney is finished” Jack Bristow whispered into the phone at nearly 3:30 in the morning, three weeks since his family had moved.

“I’ll contact you in several weeks” Jack told him.

“Bye” Bill hung the phone up.

“Sydney, who is this?” Jack flashed the image of Michael Vaughn to his little girl.

“I don’t know” Sydney scrunched her nose, trying to decide who the boy in the picture was, he had green eyes and blonde hair, like he was familiar, but a six year old couldn’t place him, “Should I know?”

“No baby, this is perfect” Jack smiled, wrapping the girl in a tight hug.

All was according to plan.

Location
A little place called the Middle of Nowhere

Ohhh...This is really good. Are Jack and Bill doing Project: Christmas on Syd and Vaughn??? I'm intrigued. Can I get a PM???

I'll have to think about that
V

yay its something i can read with out 230 somthing pages to look for *happy dance* :happydance: WOOT!!!
its so cute cawo i love it
pm please

can i get a pm when you update please?
A

I can tell already this is going to be an intresting story!!
Please add me to your pm list?!
I can't wait to see hwats going to happen!
Thanks for the pm!
S

Jack and Bill and sooo wrong, but this is really good
great start, can i get a pm when you update,
can't wait for more
J

sounds interesting
can i get a pm when you update???
N

That was a great start. i wonder what Jack and Bill are planing.

can I please have a pm?

firk i have to make a pm list now
C

That's really interesting. I'm curious to why they can't know each other. :blink:
Keep pm-ing me.
A

well naturally add me to the PM list! and update soon
S

caro, amazing is the only word for it, i love it, i cant wait to read more, please pm me, and can i be an addict? please?

This is great...confusing but great

Can i get a PM when u update.

OMG! *glears at jack* wtf?? I LOVE This fic but thats so sad! they were SOOO cute at little 6 year olds can i pleaseeeee get a PM for this?!? THanks ~Lizzy
J