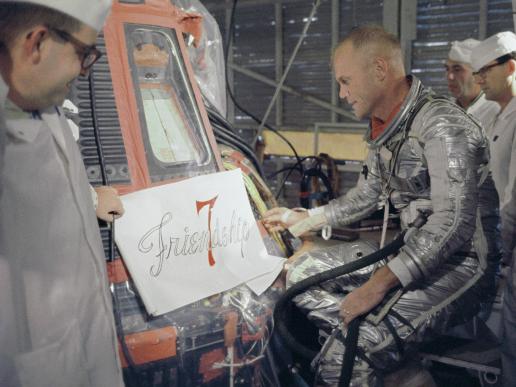 Astronaut John Glenn inspects artwork that will be painted on the outside of his Mercury spacecraft, which he nicknamed Friendship 7. On Feb. 20, 1962, Glenn lifted off into space aboard his Mercury Atlas (MA-6) rocket to become the first American to orbit the Earth. After orbiting the Earth 3 times, Friendship 7 landed in the Atlantic Ocean, just East of Grand Turk Island in the Bahamas. Glenn and his capsule were recovered by the Navy Destroyer Noa, 21 minutes after splashdown. Image Credit: NASA (More at NASA Picture Of The Day)