NASA Picture Of The Day
Inspiration on Parade 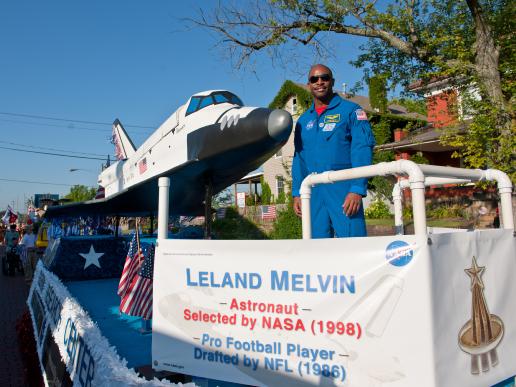 Astronaut Leland Melvin waved to the crowds from the NASA Glenn Research Center float during the 2010 Pro Football Hall of Fame Festival Timken Grand Parade on Saturday, August 7, 2010. Melvin is a veteran of two space shuttle flights to the International Space Station and has logged over 565 hours in space. Prior to his selection as an astronaut, he was chosen by the Detroit Lions in the eleventh round of the 1986 National Football League college draft and participated in the Toronto Argonauts and Dallas Cowboys football training camps. Melvin is currently on assignment at NASA Headquarters in Washington, D.C., in support of the Summer of Innovation program. In doing so, he has traveled across the country, engaging thousands of students and teachers in the excitement of space exploration and inspiring them to pursue careers in science, technology, engineering and mathematics, or STEM. The Summer of Innovation initiative is a multi-faceted, intensive middle school program designed to improve STEM teaching and learning in partnership with federal agencies, non profits, industry, and academic and information organizations. Melvin rode on the NASA Glenn Research Center float that depicted the Space Shuttle Discovery. The float won the Janice C. Meyer award for exceptional merit during the parade. Image Credit: NASA/Chris Lynch (More at NASA Picture Of The Day)

Space Apollo 7 at the 1969 Inaugural Parade