NASA Picture Of The Day
Into the Light 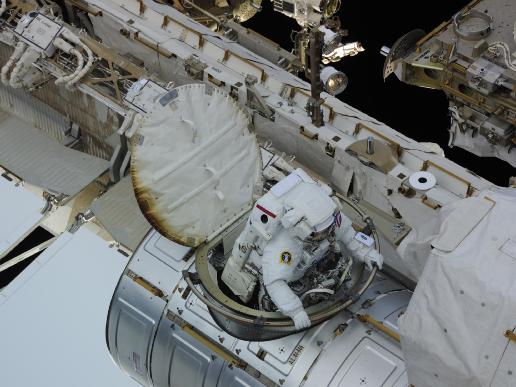 Reflecting on his experience as he emerged from the craft into the daylight on the Expedition 24 mission's second spacewalk, astronaut Doug Wheelock said "the colors of the Earth just explode at you as you exit toward the planet. Notice what looks like scorch marks on the hatch thermal cover, the effect of vacuum and atomic oxygen on the threads and thread sealant used on the thermal cover. The 'smell' of space follows suit, I’ve heard it described like burnt cake or cookies, or like the smell of an extinguished match." Wheelock and fellow astronaut Tracy Caldwell Dyson completed the second of three spacewalks to remove a failed ammonia coolant pump module on the station's S1 truss on Wednesday, Aug. 11. Image Credit: NASA (More at NASA Picture Of The Day)