Her rep confirms that the actress has signed on to play Black Widow in the Iron Man sequel opposite Robert Downey Jr. The deal was signed this afternoon.
"Scarlett is thrilled to be a part of Iron Man," her rep, Marcel Pariseau, tells me.
Meanwhile, after months of negotiations...
The Wrestler's comeback kid, Mickey Rourke, has finally sealed a deal to play villain Whiplash, according to Variety.
Rourke's team had reportedly held out for more money after Marvel's initial offer was just $250,000.
Scheduled for a May 2010 release, part two of the franchise will also include Gwyneth Paltrow returning as Pepper Potts, along with Samuel L. Jackson as Nick Fury and Don Cheadle playing Col. James "Rhodey" Rhodes.
··· THEY SAID WHAT? Get today's most commented stories now at www.eonline.comMickey Rourke Wrestling With Iron Man 2Iron Man 2—Stat!Samuel L. Jackson's Ironclad Marvel DealRobert Downey Jr. Going the Distance With Iron ManBatman, Iron Man, Hulk Hoping for Oscar HeroicsIron Man 2 Switcheroo: Cheadle Replaces HowardFavreau Totally Blogs, Questions Iron Man II Date

The above info is a shame as the clues at the end of the Hulk movie and Iron Man led me to believe that the next movie, "The team, they were putting together "Tony Stark was hinting at would be THE AVENGERS. Next to the X MEN my fave Marvel super hero team. Oh well..... No doubt it will still be a good film.

ya, i got the same impression after the hulk movie since it was laid out plain and clear there would be the avengers next. still i am happy to see a new iron man being made.
R

Looking forward to the sequel. I think they did a great job with the first one, and i love the cast. 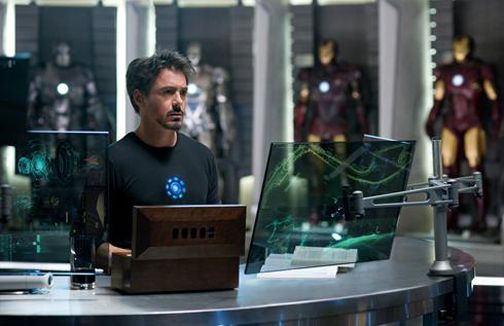 Here it is, the first official photo from Iron Man 2. Tony Stark is looking concerned because he ran out of bourbon while a wall of Iron Men look on. I can't wait.

Director Jon Favreau says that Iron Man 2 will take place six months after Tony Stark tells the world that he's Iron Man, and they want "play with idea" of a superhero who's open about his identity. "But it obviously has consequences-in his relationships, on the team. There are a lot of areas we can explore." Yes, like what if all of his suits got together and formed a dance troupe?

In the photo we see the original suit used to break out of his hellish imprisonment, his Mark II armor and two sets of the Mark III&mdash;the old and busted one from fighting Iron Monger and a brighter, shinier one that's all cleaned up. I know I've still got Terminator, Star Trek and Harry Potter and Transformers this summer, but I want Iron Man 2 to come out now. [USA Today]

Staff member
Somebody refresh my memory... I thought in one of the Avengers story lines Iron Man is more-or-less an 'associate' member and not a full-time member, meaning that he joins the Avengers for some missions but not all. That would fully allow an Iron Man 2 movie showing Iron Man still working alone taking place at the same time as the Avengers are forming.

Or am I thinking of a different character? (eg: Batman in the animated series of Justice League)

your right kevin. he is an associate member of the avengers yet he appeared with them more often that not. from what i have read to this point it appears that this movie will be as great as the first and judging from the photo above it goes in line with the setup that the comics had for his 'lair'.

Enjoyed the frist hoping number is just a good or better.