Staff member
Just saw this one in the local news. I, uh, don't think I'll be attending but it's good to see local con shows. 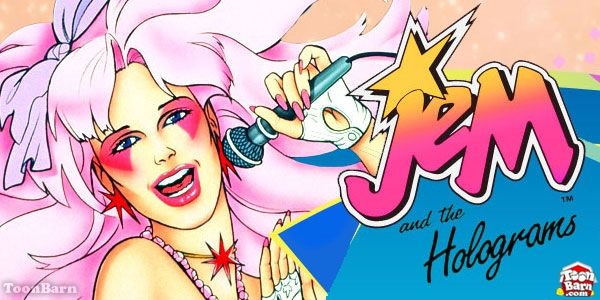 
JemCon, a convention celebrating the 1980s cartoon Jem, hits the Philadelphia area this weekend. If the Jem theme song has anything to do with it, the convention is sure to be truly, truly, truly outrageous.

The cartoon, created by Christy Marx, ran from 1985 to 1988 and has a small but dedicated fan base that worships at the altar of Jerrica Benton - owner of Starlight Music by day and rock star Jem by night. Marx will be attendance at the 11th annual convention, which takes place at the Holiday Inn Lansdale, meeting and greeting fans and discussing the show during the convention's various panels.

The cartoon Jem had a neon glow to it, and a killer 1980s-inflected sound track that included tunes from both Jem and her backing band, the Holograms, as well her archrivals, the Misfits. (Indie rock fans will recognize Jem's singing voice as that of Britta Phillips, of duo Dean and Britta, who will be at the convention.)

The show also featured a female protagonist who was both her own boss and a rock goddess.

"It's amazing to see an adult female human cast with actual agency. They just go about their rock star/executive/foster-parent lives as human beings, without commentary on their gender," said Liz Pemberton, founder of JemCon. "You have a hard time finding that in media overall now - it was truly unique for a cartoon in 1986."

"I didn't set out with the goal of making a feminist creation. It has strong, independent female characters because I'm a strong independent woman," Marx said. "The only thing I had in mind was making a good animation series with characters that people could care about, and telling good stories. The underlying feminism is an unintentional bonus."

Marx may not be regularly making TV anymore, but she's still in the storytelling business, working at mobile game company Zynga (creator of FarmVille and Words With Friends), where she is a principal game designer and narrative director, finding ways to mesh stories with gameplay.

Controversy hit theJem fanbase when news broke that Marx would not be involved with the making of the Jemmovie.

"There was a huge, negative reaction, a spontaneous #WeWantChristy hashtag campaign, and I was inundated with email, posts, tweets, you name it. I appreciated the depth and breadth of the fan support," Marx said. "At the same time, I have no desire to trash the movie or [director] Jon Chu. I've gotten to know Jon and think he's a terrific person who made the bestJem movie he was able to make under the circumstances of a limited budget."

Marx agreed to a cameo in the movie, and hopes the community that has grown around her creation gives it a chance.

Community is what conventions like JemCon are about, as much as they are about celebrating a character or a cartoon. Pemberton said, "I'm a pretty hardcore introvert, and so the idea of creating community is automatically intimidating to me, really. But serving any community that has welcomed me and drawn me out of my shell is another matter. Show me a niche to fill, and I'll run with it."

Damon D'Amore, the local organizer for JemCon, said about two-thirds of past conventions were made up of regular attendees. So many communities that form around nostalgic properties such as Jem are based on the Internet, and conventions are a chance to get to develop these "long-distance friendships," as D'Amore referred to them.

D'Amore himself rode on a train for 13 hours to get to his first JemCon, in Portland, Maine, in 2013.

Marx, asked why she likes to attend conventions such as JemCon, said, "It's amazing to connect to so many different people from around the world - I regularly see fans from the Netherlands, Canada, Scotland, Italy, etcetera - who share a common passion for something I helped to create. I'm touched by their stories and what Jem has meant to them, by the universal power of stories to connect us all.

"To be perfectly honest, the cons make me feel good. They make me feel that I've done something beneficial that has a chance of living on beyond me."​
Last edited: Aug 27, 2015