Europe's space freighter will undock from the International Space Station on Friday after completing its maiden mission to the orbiting platform.
The ship - dubbed Jules Verne - will release itself from the rear of the ISS before diving into the atmosphere in three weeks' time, on 29 September.
Re-entry, over the Pacific Ocean, will destroy the vehicle and the station waste loaded on to it by astronauts.
The automated undocking procedure is expected to get under way at 2130 GMT.
Events will be overseen by ISS mission controllers in Moscow, but also by Jules Verne's dedicated management facility in Toulouse, France.
"It has satisfied all its requirements; it's met all our dreams and more," said John Ellwood, from the European Space Agency (Esa).
JULES VERNE - THE FIRSTS 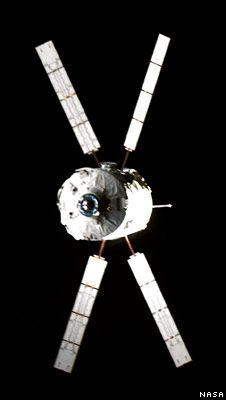 "The performance has in some cases been even better than we expected. It's been very satisfying after so much hard work by so many people," he told BBC News.
The ship - also known by the generic name Automated Transfer Vehicle (ATV) - is an immensely complex spacecraft.
Although many of the Esa's scientific satellites are extremely sophisticated, nothing matches the scale of the freighter.
After launch, the robotic craft can work out where it needs to go in space, and then makes a fully automatic docking once it arrives at its destination.
It was developed for Esa as part of its ISS membership agreement, to haul cargo, propellant, water and oxygen to the space station; and also to provide propulsion capacity at the station.
On five occasions, Jules Verne has been called upon to fire its thrusters to lift the ISS higher into the sky, something that needs to be done every so often as the platform has a tendency to drift back to Earth as it skirts through the top of the atmosphere.
One of those re-boosts was required to move the ISS clear of debris from a disintegrated Russian satellite.
But Jules Verne has shown itself to be more than just a clever store cupboard and now, at the end of its life, a high-flying rubbish incinerator.
Astronauts, it seems, have appreciated the large space inside the ship. Its docking position on the rear of the platform has been a quiet place to sleep for some crewmembers.
The space has also been used as a bathroom, and the South Korean astronaut and nanotechnology engineer Yi So-yeon who visited the station in April used the vessel as a place to do her microgravity experiments.
From an engineering standpoint, the mission has raised no major technical issues that need to be taken into the next freighter which is already in preparation for an expected June 2010 launch.
Shortly after docking on 3 April it was noticed that a thermal jacket that protects the vehicle from the extreme conditions in space had lifted up slightly.
"But this was not really a problem," said Michael Menking from EADS-Astrium, which leads production of the vehicle. "If you measured the temperature inside there was no issue."
And with Jules Verne still operating on all its primary systems, the maiden voyage has in many ways been remarkably uneventful. "You'll understand if I say I like a really boring mission," joked Mr Menking.

After Friday's undocking, ATV-Jules Verne will sit under the space station until its final de-orbit manoeuvre can be timed with a night re-entry into the Earth's atmosphere.
Darkness will allow spotter planes to follow the fiery descent over an uninhabited part of the Pacific.
"It will be much easier to observe at night," said John Ellwood. "We're going to do the re-entry directly underneath the space station so the astronauts can take photographs of it.
"We want to make sure that everything we've done is correct, and this will be the final confirmation."
The question then remains as to what Esa wants to do with the technology. It is already committed to flying another four cargo missions to the ISS, but there is a strong desire among agency management and in industry to turn the ATV into a crewed vessel.
This would see the propulsion and avionics section of the ATV being fitted with a capsule that could survive re-entry and bring astronauts safely back to Earth.
EADS-Astrium believes a step-by-step programme with a budget of a couple of billion euros could evolve the current unmanned design into a fully independent European crew space transportation system.
Esa member states are likely to be asked to discuss the issue when space ministers meet in The Hague in November.
"We are optimistic, we've done our own studies from the technical point of view; but the Esa Council at the ministerial level is the right forum to decide if the 'ATV Evolution' is realised or not. It's a political decision," said Mr Menking.
"It would be cargo re-entry as a first step and then, as a second step, you could think of a crew system."
Jonathan.Amos-INTERNET@bbc.co.uk