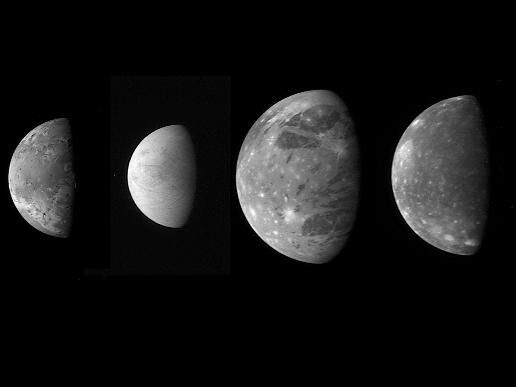 On Jan. 7, 1610, Galileo Galilei's improvements to the telescope enabled humanity to see Jupiter's four largest moons for the first time. Io, Europa, Ganymede and Callisto--the so-called Galilean satellites--were seen by the Long Range Reconnaissance Imager on the New Horizons spacecraft during its flyby of Jupiter in late February 2007. The images have been scaled to represent the true relative sizes of the four moons and are arranged in their order from Jupiter. Io is notable for its active volcanism, which New Horizons studied extensively. On the other hand, Europa's smooth, icy surface likely conceals an ocean of liquid water. New Horizons obtained data on Europa's surface composition and imaged subtle surface features, and analysis of these data may provide new information about the ocean and the icy shell that covers it. New Horizons spied Ganymede from 2.2 million miles away. Ganymede, the largest moon in the solar system, has a dirty ice surface cut by fractures and peppered by impact craters. New Horizons' infrared observations may provide insight into the composition of the moon's surface and interior. Scientists are using the infrared spectra New Horizons gathered of Callisto's ancient, cratered surface to calibrate spectral analysis techniques that will help them to understand the surfaces of Pluto and its moon Charon when New Horizons passes them in 2015. Image Credit: NASA/JHU-APL/Southwest Research Institute (More at NASA Picture Of The Day)