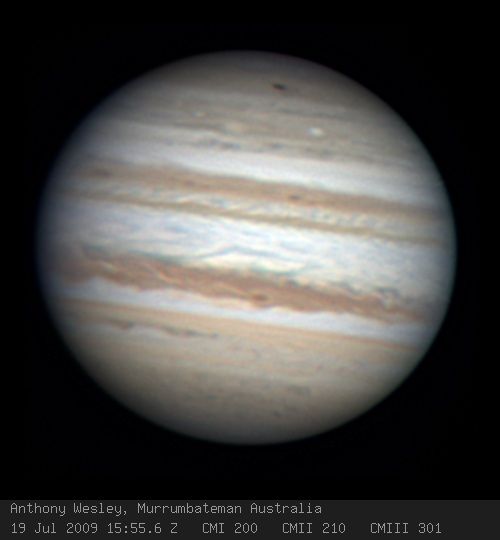 Explanation: In July of 1994 pieces of Comet Shoemaker-Levy 9 collided with planet Jupiter. The explosive impacts sent plumes of debris high into the Jovian atmosphere creating dark markings or scars, visible for a time against the cloud bands. Remarkably, 15 years later, another impact scar was discovered in the Jovian atmosphere by amateur astronomer Anthony Wesley as he examined images of the gas giant taken from his home observatory just outside Murrumbateman NSW Australia. Jupiter's south pole is at the top in this July 19 discovery image, with Jupiter rotating from right to left. The dark marking, also likely caused by a comet or asteroid impact, is near the top of the view, left of a pre-existing, whitish, oval-shaped storm. NASA's Infrared Telescope Facility images from Mauna Kea, Hawaii later confirmed the likely impact site's dark scar and plume of particles in Jupiter's upper atmosphere. Since 2006, major discovery observations by amateur astronomers have also included two red spots on Jupiter.

Staff member
So, what do you think caused the new scar?

A giant black obelisk by any chance?