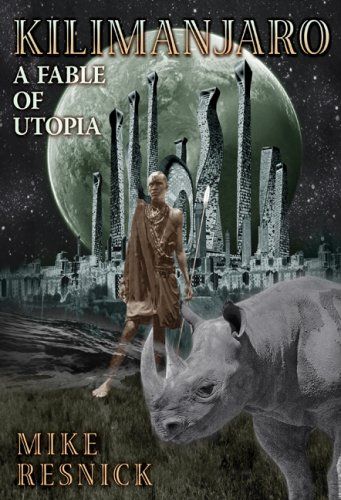 I have already reviewed some of Mike Resnick's African fiction, including his magnificent fix-up, Kirinyaga. That work told the tale of Kikuyu utopia (the Kikuyu being a tribe from Kenyan Africa) in space on a planetoid built and terraformed by a UN-style agency called the Eutopia Worlds Project. Kirinyaga, the Kikuyu word for what most non-Africans know as Mount Kilimanjaro, was largely a failure. It was envisioned as a traditional Kikuyu homeland, where descendents of the that tribe could live in accordance with ancient social rules and free from technology. The problem was that Koriba, the mundumugu, or "witch-doctor," tried to control not only the environment, but the minds of the colonists as well. Koriba made many mistakes during his tenure, and eventually exiled himself back to Earth, after immense pressure from the Eutopian Worlds Council, while Kirinyaga went on to succeed without him. This story, Kilimanjaro is set approximately 112 years later, in 2234. Another African tribe from Kenya, the Maasai, have petitioned for and been awarded an Eutopian World of their own. Forearmed with a deep understanding of Koriba's mistakes, the leaders, including a tribe of elders, an attorney, and a historian, named David ole Saitoti ("ole" meaning "son of,") have set out to create a real utopia for their people...Please click here, or on the book cover above, to be taken to the complete review..