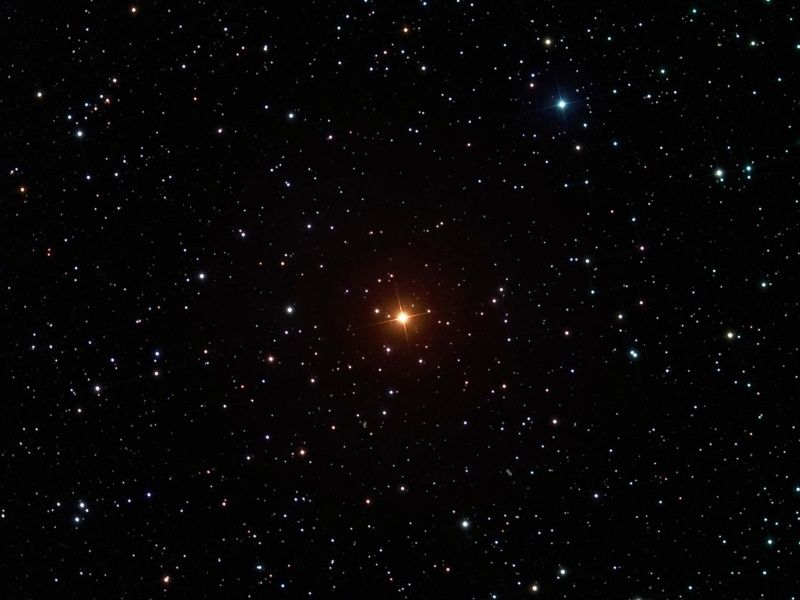 Explanation: Y Canum Venaticorum (Y CVn) is a very rare star in planet Earth's night sky. It's also very red, exhibiting such a remarkable spectrum of light, 19th century astronomer Angelo Secchi dubbed it La Superba. Located 710 light-years away in northern constellation Canes Venatici (the Hunting Dogs), the star varies in brightness over a period of about half a year. Near maximum, it becomes just bright enough to see with the unaided eye, but the star's beautiful red hue is easy to see in binoculars or a small telescope. In fact, La Superba is among the brightest of the carbon stars - cool, highly evolved red giant stars with exceptional abundances of carbon. The carbon is created by helium fusion near the stellar core and dredged up into the stars' outer layers. The resulting overabundance of simple carbon molecules (like CO, CN, C2) in the atmospheres of carbon stars strongly absorbs bands of bluer light and gives these stars a deep red color. La Superba is losing its carbon-rich atmosphere into the surrounding interstellar material through a strong stellar wind, and could be near the beginning of a transition to a planetary nebula phase.

Largest Explosion in Space Ever