Tech Last New VHS VCR To Be Made

Staff member
Here we are, in 2016, with streaming video on everything from our game consoles to being built-in to our TVs to being available on our phones. Just about anywhere we are we can watch videos.

Thanks to streaming the sales of DVD discs and players have been greatly reduced. But what about VCRs?

Yep, VCR players and cassettes, those things a lot of us grew up on as we rented movies from the local Blockbuster and got excited when the 6 hour versions came out. Technology literally decades old but still out there being used and new players still being made. This month will be a bit of a moment to remember in the world of technology as the last VHS VCR will be built.

Japan's Funai Electric, supposedly the world's last VCR manufacturer according to them, has announced that'll cease production of the VHS VCR as the end of this month after having started back in 1983. Sony, RCA, Panasonic, and other major brands of VHS VCR players ceased production long ago.

Funai had been selling up to 15 million units a year but last year sold just 750,000. A company representative has indicated that finding components to make the players has been more difficult. The Funai made units were sold & branded by different international companies with "Sanyo" being the most recognizable in the North American market.

The first generation of consumer VCRs for the home were introduced back in the 1960s and took off in the mass market after Sony introduced lower-priced versions. There were several types of VCR formats vying for the market, ultimately the VHS format won the war for consumer mass acceptance even though Sony's Betamax format was arguably of better quality.

The mass VCR market for consumers really took off in the early 1980s after a US Supreme Court decision that ruled that recording television broadcast signals was not a copyright violation. Soon after a VCR could be found in most homes that had a TV thanks to cheap prices, easily available cassettes for recording, a boom of local video rental stores, and the social aspect of lending recording to friends.

So long VHS VCR, it was good knowing you as a kid. 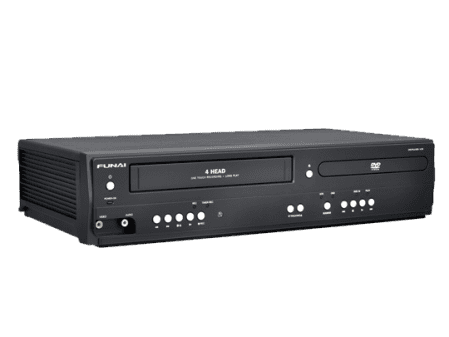 I can't say I am sorry to see them go. Cds and DVDs are fast becoming the same. Right now virtual is the current wave. It will be replaced eventually with some newer technology that will be better yet.
Perhaps something like direct signal to nerve induction.

There are still people that have wind up record players and 78 rpm one-sided slate pressings. VHS and the player needed to play them will remain and collectors will eventually want to buy up all your cassettes.

All my entertainment is currently electronic. I got rid of every other device and its media in favor of ones & zeros. I have my family videos & pictures backed up to several online drives.

People ask me, What would you do if electricity went out or electronics everywhere were rendered useless. My short answer: "At that point, Recreation will be the last thing on my mind."
BTW, My boxes of family photos still exist - I just gave them to my kids. If I need to print a new photo for my desk or wall, I have a good printer.