Space Learning Can Be a 'Drag'

NASA Picture Of The Day
Learning Can Be a 'Drag' 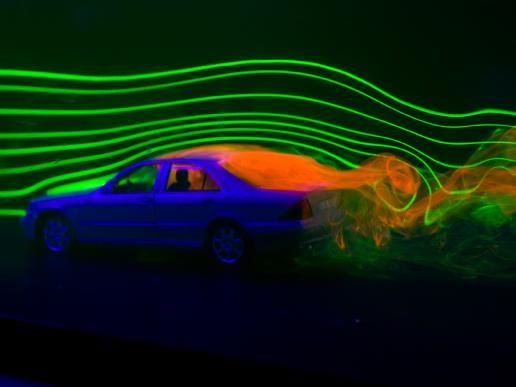 When Ajay Ramesh and Prithvi Aiyaswamy, two seventh graders from Chaboya Middle School, San Jose, Calif., visited the Fluid Mechanics Laboratory at NASA Ames Research Center they found that the principles of fluid mechanics are not such a 'drag' after all. The two youngsters both showed up for their experiment with a half dozen toy cars they found at home. "Our project is to find the best design shape that has the least amount of drag," said Aiyaswamy. "As we began the experiment, we realized that cars with a sloping shape perform better." The orange liquid behind the car illustrates the wake, which can be used to determine drag for the car. The green lines across illustrate the air moving across the car. The boys were fortunate to request their visit when the Fluid Mechanics Laboratory was uniquely set up to accommodate their request. Kurtis Long, test engineer at the Fluid Mechanics Lab received permission for the boys to visit and donated his lunch hour to help the boys perform their test. The boys placed the cars in a pool of water. Dye was added to the water and photos were taken of the dye flowing around the toy cars. "Air and water have the same flow characteristics, but by using water we can slow down time and see the flow more clearly," explained Long. With these photos, the boys could measure the drag of each car. The orange liquid behind the car illustrates the wake, which can be used to determine the car's drag. The green lines across illustrate air moving across the car. Image Credit: NASA/Eric James (More at NASA Picture Of The Day)

Forty Years Ago, A Cosmonaut Experienced What Can Only Be Described as 'Hell' [Space]