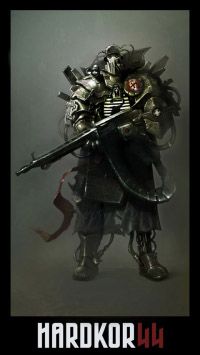 Thanks to our friends over at Opium we've got word on Platige's next project, Hardkor 44 which is WWII based scifi and possibly steampunk. It's about the Warsaw Uprising and will be done in cooperation with the Museum of the Warsaw Uprising in an "unconventional way" and will not "hold fast to the original facts". Platige is one of the top animation houses on the planet and even did work on Lars von Trier's Antichrist which you can see here. Our friends tell me that the memory of WWII is kind of a sacred thing in Poland and that this film will be a "breakthrough". It's live action and HEAVY on the cgi.

Tomek Baginski, will be announcing more details on the project at the premier of his stunning short Kinematograph tomorrow. Word is Baginski is also writing the script which he'll be working on till December. Hopefully we'll have more details tomorrow.

UPDATE: Our pals at Opium have tracked down a ton of new mind-blowing concept art and provided a translated synopsis:

The action will take place at the end of 1944. The Germans direct to Warsaw a squad led by oberführer SS Wagner, infamous for his cruelty and deformed face. He is supposed to wipe the capitol of Poland off the face of the Earth. Meanwhile, on the Polish side of the barricade there a mysterious man called Arnold appears. He is a handsome soldier who disappeared without a trace in 1939. He assembles a group of insurgents from slyboots from Praga and Wola (districts of Warsaw). Together with a few criminals, collaborants and other types of suspicious characters Arnold will try to get the spoil of war that Wagner accumulated.

In Warsaw, however, a surprise awaits our heroes. Wagner has an ace up his sleeve - a squad of cyborgs built from metal and organs of the worst recidivists found in prisons and concentration camps by psychopathic Nazi scientists. Only Arnold's team will be able to oppose such power and at the same time they will discover the truth about themselves.

Check out all the concept art after the break!