They are still in the planning stages and asking yourself just how far 100 miles per charge is going to get you is a very strong issue surely? And I'm really hoping they aren't too silent, as revellers in teh dark evenings aren't going to see or hear a black cab running on electric when they step off the kerb!

'Leccy Tech While denizens of New York and California will soon see the recently announced Mini E gliding down their streets, Londoners will have to make do with a 'leccy version of the city's famous black cab.
The Financial Times has reported that Chinese car maker Geely - which owns 23 per cent of Manganese Bronze, the UK-based maker (through subisdiary LTI) of the venerable and iconic TX4 London black cab - has been “in talks” with the Men from the Ministry here in the UK with a view to having electric cabs purring up and down Regent Street.
Development of the 'leccy cab will be undertaken by Tyne & Wear-based company The Tanfield Group under a deal announced back in April. The target date for the first vehicles to hit streets of London is “early 2009”. 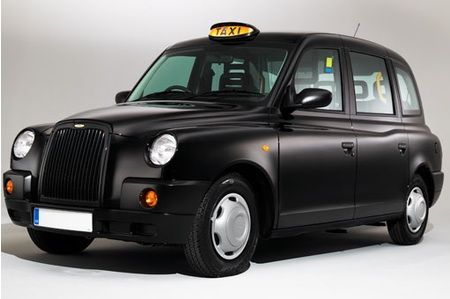 LTI's black cab: I 'ad that Liffium Ion in the back once...

Technical details of the TX4 E are few and far between, but the aim is said to be a top speed of 50mph and a range between charges of 100 miles, which should be enough to get you 'sarf of the rivah' - or provide another excuse not to: “Sorry, guv, no charge left...”
The vehicle will use a lithium-ion iron phosphate battery pack, and is hoped to have a running cost of 4p a mile, though that's after the yet-to-be-determined initial purchase price. No news on where exactly the battery pack will go, either, BMW's answer - sticking it where the rear seats used to be - clearly not being an option.


All this being said, there doesn't appear to be anything in writing between Manganese and quango Transport for London (TfL) with whom relations have already been strained by the 12 TX4 cabs that caught fire in September.
Manganese may, however, be hoping that the hand of London Mayor Boris Johnson will be forced by his June invitation for manufacturers to put forward proposals for low-carbon cabs. As young Boris said at the time: "As well as significantly cutting carbon dioxide emissions, we're looking for taxis that are quieter and produce fewer air pollutants, which will be good news for anyone who spends time in London.”
Of course all this may have more to do with cabs for Beijing and other Chinese cities with serious air pollution problems, as Geely also owns 51 per cent of a Shanghai-based joint venture that will start producing TX4s in China come December.

Staff member
It'd be interesting to see what the estimated range for them will be since I can't imagine the typical cabbie being too happy about having to stop accepting fares while their vehicle is sitting idly charging.