NASA Picture Of The Day
Lulin 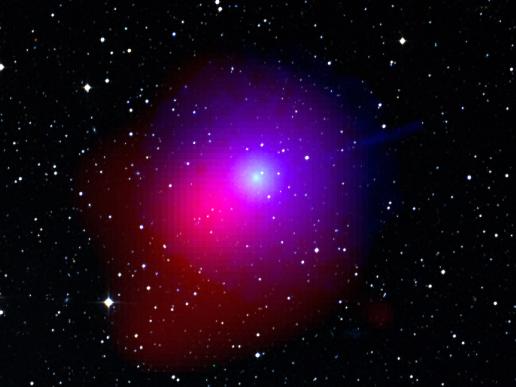 NASA's Swift satellite views Comet Lulin as it made it closest approach to Earth in February 2009. Lulin, like all comets, is a clump of frozen gases mixed with dust. These "dirty snowballs" cast off gas and dust whenever they venture near the sun. Comet Lulin, which is formally known as C/2007 N3, was discovered in 2008 by astronomers at Taiwan's Lulin Observatory. Lulin passed closest to Earth -- 38 million miles, or about 160 times farther than the moon -- late on the evening of Feb. 23, 2009, for North America. Image Credit: NASA, Swift, Univ. Leicester, DSS (STScI/AURUA), Dennis Bodewits, et al. (More at NASA Picture Of The Day)