Staff member
So who else poked their head outside tonight to check out the lunar eclipse?

It wasn't as 'orangey' as I was expecting it to be but it was still pretty cool to see in person. Where the wife & I live now we are a bit out in cow country so the skies are clearer compared to the town I grew up in; seeing stuff like the eclipse now with clear skies is much different from trying to view it at a place where the town lights interfere.

Unfortunately my P&S camera isn't quite up to the task of taking decent night shots so hopefully Robbie or somebody else will come across a few shots from tonight.

It has been really foggy here the last few days and last night the sky, well it wasn't visible. I did consider trying to capture the moon, but it wasn't possible due to the weather in the end. So I got some extra sleep instead! 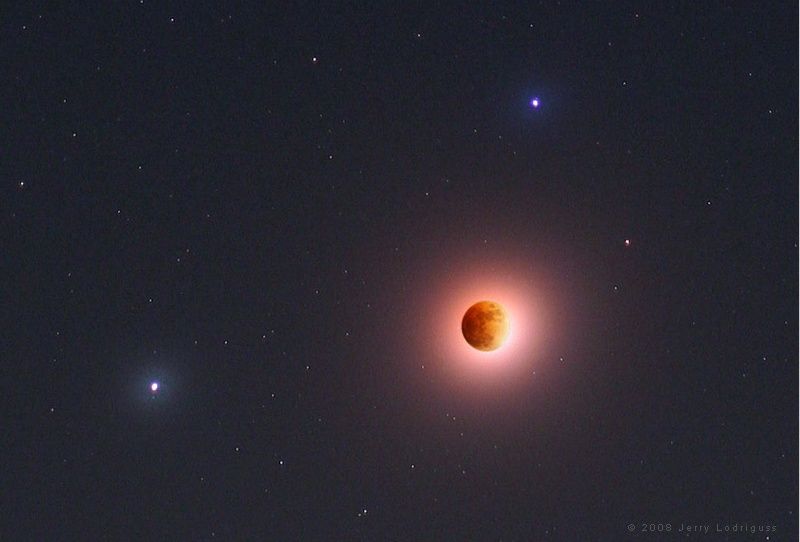 Explanation: Moon watchers blessed with clear skies over the Americas, Europe, Africa and western Asia enjoyed a total lunar eclipse this week. Catching eclipsed moonlight, astroimager Jerry Lodriguss offers this view of the inspiring celestial event with the shadowed Moon accompanied by wandering planet Saturn at the left, and bright Regulus, alpha star of the constellation Leo, above. The engaging composite picture was made by combining a filtered, telephoto image of the Moon and surrounding starfield with a telescopic exposure. The combination dramatizes the reddened moonlight while clearly showing the variation of brightness and color in Earth's not-so-dark shadow across the lunar surface.