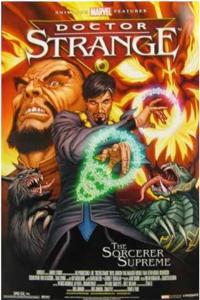 The bad news is that they want to make Marvel’s supernatural comic book hero Doctor Strange into a big-budget live action movie. The good news is that it will be directed by Guillermo Del Toro and based on a screenplay by Neil Gaiman.

Created by comic book legend Stan Lee and artist Steve Ditko as far back as 1963, the good doctor has never been one of our favorite Marvel characters to be honest, so we’re not particularly excited about a big screen movie. To recap: Dr. Stephen Vincent Strange is, um, Doctor Strange. A renowned but arrogant surgeon, Strange has an automobile accident one day and suffers some damage to his hands. Being unable to practice as a medical doctor anymore turns out to be a lesson in humility for Strange even though he still later on refers to himself as the “Sorcerer Supreme”. Not only that, but seeking a cure he comes across an ancient wise man called the, um, Ancient One in the Himalayas (where else?) who teaches the good doctor some, like, real magic. Strange returns to the States as a nattily dressed magician with real supernatural powers where he combats evil, usually in the guise of supernatural threats such as ethereal demons and not just pickpockets or the sort of criminal that everyday people like you and me must unfortunately cope with.

The problem with the Dr. Strange comics has always been his humourless persona. Strange is at his best as a bit character in someone else’s title, the straight guy against whom the hero bounces quips off – the expert Spider-man consults when he is up against a supernatural threat and out of his depth. Making Dr. Strange the hero of his own comic is like making the Jedi the heroes of the Star Wars movies . . . and we all know how that turned out! Put simply: Dr. Strange and his otherworldly concerns is simply too far removed from everyday human issues to identify with. Making him the hero of a movie would be like making The Karate Kid, but with Mr. Miyagi as the hero instead of Ralph Macchio.

Dr. Strange was popular with college types back in the ‘Sixties thanks to Ditko’s surrealistic art work (the comic you can get stoned to!). That Marvel is willing to making a big budget movie based on such a lesser-known character is largely thanks to the recent good box office of Iron Man – not exactly an A-lister himself unlike let’s say Spider-man or the Fantastic Four.

Getting Guillermo Del Toro who directed the Hellboy movies and the much celebrated Pan’s Labyrinth to direct it is sheer genius. So is getting Neil Gaiman (Stardust, the Sandman comics) to do the screenplay. If there are any two people who can make one actually look forward to a Dr. Strange movie adaptation, it’d be these two.

Marvel must have been sorely tempted though to simply get a hack like Mummy / Van Helsing director Stephen Sommers instead of waiting for a space in Del Toro’s busy schedule! (Del Toro is going to direct the two movies based on Tolkien’s The Hobbit next.) That is especially if the recent full-length Doctor Strange (2007) animated movie is anything to go by. Tasked with introducing the character to new audiences, it is an “origin” story in which the Doctor is reinvented as . . . a hip anime character. Who knows, like, martial arts. And magic. And stuff. OK, we’re being unfair, the movie isn’t that bad, but it is likely to irk long-time fans of the comic. But the movie goes someway towards humanizing Strange. It is after all tough to have an unlikable arrogant ******* as your hero, even if he does eventually find Zen peace and protects our Earthly plane against other-dimensional demons. 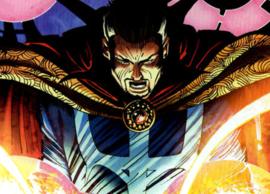 But the action in this animated movie tends to be on the superficial spectacle-driven side, a case of “it looks cool, but what exactly is happening?” With all the advances in special effects over the past decade one can easily imagine a director such as Sommers or (God forbid!) Rob Cohen OD’ing on a noisy, over-the-top CGI extravaganza.

Hopefully Del Toro however doesn’t seem all that interested in re-inventing the character for a young hip audience. “I talked with Neil Gaiman [about writing it],” he said in an interview. “I said, that's an interesting character because you can definitely make him more in the pulpy occult detective/magician mold and formula than was done in the Weird Tales, for example. The idea of a character that really dabbles in the occult in a way that's not X-Filey, where the supernatural is taken for granted. That's interesting.”

The bad news is that if you’re a long time fan you’d be disappointed to hear that Del Toro is going to ditch Doctor Strange’s famous – or is that infamous? – suit, one of the more flamboyantly camp outfits in a comic book universe not particularly renowned for its sartorial restraint. But hey, you can’t win them all . . .

Contrary to this article, Dr. Strange has his fans, myself among them. I like his aloof style, his devotion to protecting the Earth against the lords of the dark dimension, especially Dormammu. With Neil Gaiman as the script writer, if it isn't too far over the heads of the uninitiated, it should be a fabulous act of story telling. — Mike Shelton (via e-mail)
Last edited by a moderator: Sep 16, 2016

Stephen Strange shows humility before the Ancient One in new images from Marvel's "Doctor Strange"! Check out the photos below and see "Doctor Strange" when it lands in theaters November 4.

After a horrific car accident leaves his hands permanently impaired, famed neurosurgeon Stephen Strange (Benedict Cumberbatch) travels to the furthest corners of the world to find a cure! Stranges crosses paths with the Ancient One (Tilda Swinton) who opens up worlds to the doctor he had only ever dreamed of. See what's in store for the doctor in the images above!

In a new behind-the-scenes look at Marvel's "Doctor Strange" above, star Benedict Cumberbatch along with the cast and producers talk about Strange's transition from an "incredibly arrogant" neurosurgeon to mythical super hero following a car accident.

"Doctor Strange" lands in theaters November 4, opening up a whole new realm of possibilities for the Marvel Cinematic Universe! Make sure to follow @DrStrange on Twitter and like "Doctor Strange" on Facebook for all the latest news and updates.

I don't Watch TV so I have no idea when the previews will hit the tube.

Doctor Strange Just Got Its First TV Spot, Watch It Now
By Conner Schwerdtfeger
1 month ago