Rumors about a third Men in Black movie have been floating around for ages, but it seems more definite when a Sony suit recently mentioned it in the passing by during a public speech. (The comments were made on 1 April 2009. But one can only assume that Sony suits are humourless drones who are not I the habit of playing April fool’s jokes on the public even though that doesn’t explain why it takes the Spider-man 3 disc a full two minutes to load on my Sony BLU-RAY player.) This makes it more or less official.

The question is however: who exactly has been clamouring for a Men in Black 3? Sure, if they can get Will Smith back then it’ll open big. Smith is a megastar and his name is big enough to make a success out of an Ishtar remake – but come on!

The 2002 Men in Black II was a lacklustre, exhausted rehash and there is a reason why a Men in Black 3 wasn’t rushed into production shortly thereafter. Still Sony is probably hoping that (a) short-term nostalgia will make the original Men in Black (released in 1997 – more than a decade ago now!) will make audiences forget just how mediocre Men in Black II was and (b) that the Will Smith brand will cast its normal box office magic. Point (a) is probably the same strategy the company has for Ghostbusters 3.

Word has it that Smith and Jones will return, but no news yet what the plot will involve and who will write and direct at this stage.

Staff member
Forget Will Smith & Tommy Lee Jones... I would prefer seeing a MIB movie that was more of an ensemble cast concentrating on some of the background players, like Patrick Warburton in MIB II or any of the other people who at at the MIB HQ going about their work. Sure, the movie could open with the big names in a few scenes but then let it shift towards the background characters.

That type of story line has been done a few times with various animated series (eg: JLA) and I find them pretty entertaining.

Staff member
I can now scratch Men In Black III off my list of movies to catch up watching. To put it simply... it was a bit boring.

Let's start with the good stuff. Josh Brolin does an amazing impression of a young Tommy Lee Jones. It'd be a shame if the two of them are not reunited in a different movie in some fashion. Aside from that the very ending of the movie provides a bit of insight into the relationship between K & J and why K supported J so much when he first recruited him over the objections of Zed. Space fans will appreciate that the launch of Apollo 11 plays an integral part to the plot.

Now for the bad. Zed is dead, Frank the Pug is missing, the worms only get a brief cameo appearance, and the MIB HQ looks like a scaled back budget version of itself. There are some holes in the storyline that don't even attempt to be closed and some scenes are so predictable you could likely guess the dialogue coming up & be pretty darn close to how it plays out. The major plot of the movie... will/won't the bad guy succeed... you already know the answer to because it takes place in the past and if the bad guy succeeds then the first two movies will never have happened. In addition, if the bad guy succeeds there'd be so many time paradoxes introduced that it'll give you a headache just thinking about it. The end result is that you aren't watching it play out wondering who will win or not but simply to watch the action scenes.

MIB3 apparently did well enough at the box office that a fourth movie is in the planning stage. 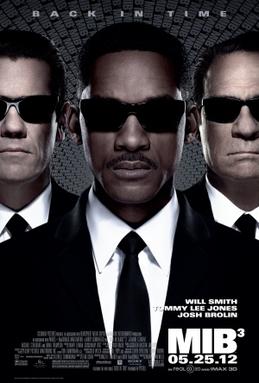 To be honest, Im glad, that I did not bought ticket to this movie in cinema. First and second parts were much better.