Plot: When Susan Murphy is unwittingly clobbered by a meteor full of outer space gunk on her wedding day, she mysteriously grows to 49-feet-11-inches. The military jumps into action and captures Susan, secreting her away to a covert government compound. She is renamed Ginormica and placed in confinement with a ragtag group of Monsters... 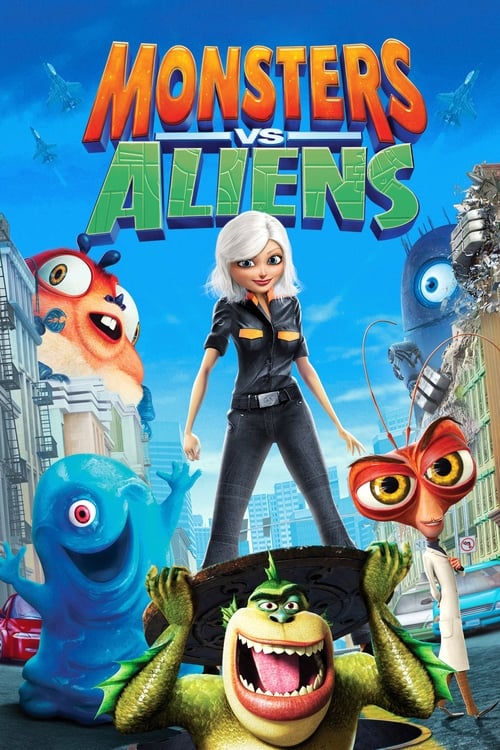 
THEY SAY Monsters vs. Aliens reinvents the classic ‘50s monster movie into an irreverent modern day action comedy. With the earth under attack by an unstoppable alien, it’s up to the monsters — (top to bottom in pic below) Insectosaurus; Ginormica (Reese Witherspoon); Dr. Cockroach, Ph.D. (Hugh Laurie); the Missing Link (Will Arnett); and B.O.B. (Seth Rogen) — to overcome their misfit status and save the world from the pending imminent destruction.

That's the premise behind Monsters vs. Aliens, the 3-D animated comedy that's coming from DreamWorks early next year.


Directed by Rob Letterman and Conrad Vernon, the movie pits four-eyed alien villain Gallaxhar (voiced by the always hilarious Rainn Wilson) against a military that's so desperate it releases a handful of monsters to defend Earth.

Vintage sci-fi and horror B-movies provided the inspiration for the flick, according to Vernon.

"I thought, 'Wow, this would be great if we could go back and do all the old 1950s monster movies, 'cause that's when monsters made you laugh," he said. "To actually have, you know, horrific monsters, but give them personalities and kind of satirize them at the same time."


This exclusive behind-the-scenes video clip offers a sneak peek at the making of the movie, with its cool-looking animation and impressive cast of voice actors.

And who is might enough to command this monstrous team? The President of the United States (voiced by Stephen Colbert, who almost occupied the Marvel White House) and General W.R. Monger (Kiefer Sutherland).

Monsters vs. Aliens is scheduled for release March 27, 2009.

Staff member
Yes, I will be watching this when it comes on DVD.
7

Woa. Looks like The Incredibles if they were fighting kaiju monsters.
J

This looks like a lotta fun. Go ahead and buy me a ticket .