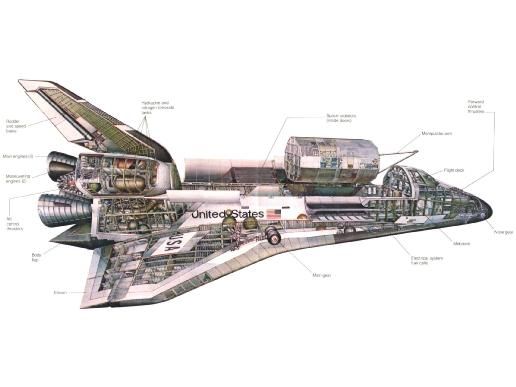 Commonly known simply as the shuttle, the orbiter is both the brains and heart of NASA's Space Transportation System. Hence, the STS before the number of every shuttle flight. About the same size and weight as a DC-9 aircraft, the orbiter contains the pressurized crew compartment (which can carry up to seven crew members), the cargo bay and the three main engines mounted on its aft end. On April 12, 1981, commander John Young and pilot Robert Crippen roared into space on the first ever shuttle mission. Twenty years earlier on April 12, 1961, cosmonaut Yuri Gagarin ushered in the era of human space flight when he became the first person to orbit the Earth. Image Credit: NASA (More at NASA Picture Of The Day)