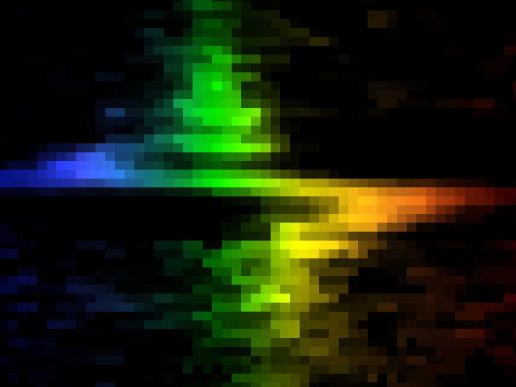 In a single exposure, astronomers were able to confirm the existence of a supermassive black hole in the center of galaxy M84. They did this by using the Hubble Space Telescope's more powerful spectrograph to map the rapid rotation of gas at the galaxy's center. The colorful zigzag provides the evidence. If no black hole were present, the line would be nearly vertical. The Space Telescope Imaging Spectrograph measured a velocity of 880,000 mph within 26 light-years of the galaxy's center. This measurement allowed astronomers to calculate that the black hole contains at least 300 million solar masses. M84 is located in the Virgo Cluster of galaxies, 50 million light-years from Earth, and a nearby neighbor to the more massive M87 galaxy, which also contains an extremely massive black hole. The image on the left shows the galaxy's center in visible light. This image was originally released May 12, 1997. Image Credit: NASA, Gary Bower, Richard Green (NOAO), the STIS Instrument Definition Team (More at NASA Picture Of The Day)